Posted in DVD Reviews by George Theofanopoulos on 24 November 2010 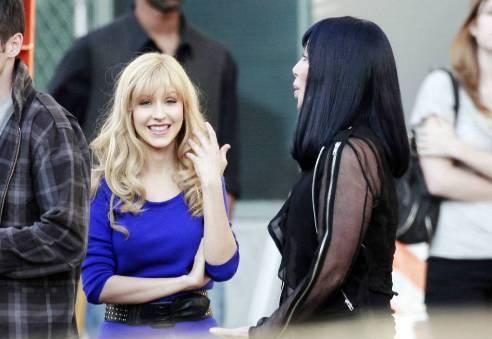 Not many entertainers can say they have done it all, but Cher is the exception. Singer, recording artist, gay icon, concert performer, television personality, and movie actress. This beautiful box set shows the world Cher’s varied career on the big screen with movie performances from the 1960’s to the late ’90’s, and its really a neat time capsule into one of the most extraordinary women of our time.

This is a set of films that Cher fans, movie fans, cine-philes, and everyone in between can enjoy. Six movies featuring our girl Cher are presented beautifully in one collection for a reasonable price.

Good Times (1967) was an outrageous vehicle for Sonny and Cher. This movie was made slightly before their hugely successful TV show. Good Times is about Sonny trying to come up with an idea for a movie for the two of them to star in. It is goofy and extremely campy; what would you expect from these two. Not the greatest movie in the collection, but worth a watch on a lazy afternoon. William Friedkin (The Exorcist) makes his directorial debut.

Chastity (1969) sounds familiar? Sonny and Cher’s daughter, well now son, was conceived during the making of this movie. She was named after this movie, not the movie being named after her (contrary to popular belief). Sonny wrote this for Cher because he wanted to showcase her as a serious actress. This may be Sonny’s best attempt to be serious, but the goofiness of the movie is almost outweighing the seriousness. The drama that went on behind the scenes on this movie would have made for a better movie. Cher cheated on Sonny because she was furious with him over how Chastity was turning out. There is next to no plot to this movie. Cher plays Chastity, a curious girl exploring the world of sex and drugs.

Silkwood (1983) is amazing. Cher plays a supporting character, Dolly, who is Meryl Streep’s roommate and best friend. Cher plays a lesbian with no flash or fance….and she does it beautifully. Never before or after has Cher looked so homely. This film is a drama in the highest degree. No longer in print, the only way to get this would be to buy it used or in this collection. Mike Nichols directs.

Moonstruck (1987) is Cher’s best known role. She was an academy award for her portrayal of an Italian lady trying to do the right thing in her own way. She is magnetic here, magical, even heart wrenching. One of the greatest performances from any actress. One of the greatest movies ever made. Definitely not to be missed.

Mermaids (1990) completes Cher’s emergence into film stardom. Cher is the Jewish mother of two girls trying to grow up in the 1960s. Like any mother, Cher’s character makes it as difficult as she can. After another break up, Cher, as Mrs. Flax, loads up the car and drives everyone to Massachusetts to begin another new life there. Of the movies in this collection, Mermaids is by far the most fun.

Tea with Mussolini (1999) finds a relatively small part for Cher. Maybe one of the most underrated movies of this time period, Tea with Mussolini is remarkably thoughtful and heartfelt. Set just before WWII, a group of wealthy English women raise a child whose mother has died. It’s nice to see that this movie was included in this set and can be brought into the light once again. Maybe more people will appreciate it after a second viewing.

There it is, 6 movies on 6 disc’s. If you own these movies already individually, its not worth buying as there are no new special features on here.

Sadly missing from this collection are a handful of Cher’s great films like Mask, Witches of Eastwick, Suspect, If These Walls Could Talk, Faithful, Stuck On You, and most upsetting of all, Come Back to the Five And Dime, Jimmy Dean, Jimmy Dean (which has still YET to be released on DVD!!!!).
Movie Content: 8/10

I was so excited when I heard about this box set. Until I saw what it actually is. As a true Cher fan I have been waiting for years for ‘Come Back To The Five and Dime Jimmy Dean Jimmy Dean’ to finally be released on DVD. This collection has their early movies but still is missing this vital one. These have all been available on DVD for years. So disappointed they haven’t released one of her best films. If it had been included I would have bought the whole set just for that one movie.
Overall Rating: 8/10