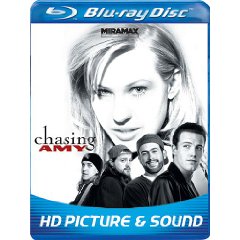 Writer-director Kevin Smith (Clerks) makes a huge leap in sophistication with this strong story about a comic-book artist (Ben Affleck) who falls in love with a lesbian (Joey Lauren Adams) and actually gets his wish that she love him, too. Their relationship is attacked, however, by his business partner (Jason Lee), who pulls a very unsubtle Iago act to cast doubt over the whole affair. The film has the same sense of insiderness as Clerks–this time, Smith takes us within the arcane, funny world of comic-book cultism–but the themes of jealousy, deceit, and the high price of growing up enough to truly care for someone make this a very satisfying movie.

Chasing Amy, the third film in Kevin Smith’s classic New Jersey trilogy (along with Clerks and Mallrats), just might be the best of the bunch. It packs Smith’s usual envelope-pushing dialogue about sex, relationships, etc. and showcases some great comic performances. If you’re feeling tired of boring Hollywood fare, Chasing Amy provides a refreshing slap in the face.

Holden McNeil, a comic book artist who’s still looking for the right woman. While attending a comic-book convention with his roommate and Bluntman & Chronic co-creator Banky, he meets Alyssa, and they quickly hit it off. Holden is convinced that he’s met future girlfriend material. However, there is one minor problem is that she is a lesbian, a fact that’s conveyed in a hilarious bar scene.

‘Chasing Amy’ takes a look at love from different points of view, how we all interpret it, and how it affects different people. Chasing Amy is full of so many variables and emotions.
The end result is a movie which all young people dealing with their own personal lifestyle decisions, in my opinion, should watch as the road Holden chooses to go down at the end of the movie reveals just how much his seemingly enlightened character has in common with Banky. The revelation that some people may not be as open and evolved as they think is the real accomplishment of Chasing Amy.
Movie Quality: 9.5/10

The print is presented in 1080p/VC-1 with a 1.85:1 aspect ratio. ‘Chasing Amy’ is not a film that will have you running down the street screaming that this is the best high def experience you have laid your eyes on. The film was made on a $250,000 budget after ‘Mallrats’ failed miserably at the theaters. I have watched this film several times on DVD over the years and this has never been the best looking film. Yet I expected a bit more from this presentation on Blu-ray. Colors are much stronger and bolder than ever before, yet there is still a muddy look to the image. The biggest issue comes with the lack of details in the first half of the film. For some reason, details are lacking much more in the first half of the film than the second half. Once there are outdoor scenes with better lighting, details shine. I just found it rather odd. The same amount of grain still makes a presence here, but is more toned down later in the film. I am ok with preserving the integrity of the original film’s print but this is off to me how the film goes from one extreme to another. I am not 100% happy with this print, but this is good enough to replace my Criterion DVD release.
Video Quality: 6/10

The audio is presented in DTS-HD MA lossless 5.1 mix. I almost feel like this film did not even need a DTS-HD track as there is not much if at all anything going on in the rears. One good example of this is during the scene at the hockey game where there isn’t much coming out from the rears, yet more front heavy experience. Bass management is well done as it fills the soundfield. Dialogue comes through the center channel rather clear, yet not loud enough.  I just did not feel as immersed as I would have hoped with this mix.
Audio Quality: 6.5/10

It took sometime for the rest of Kevin Smith’s films to come to Blu-ray, but they are all almost here with the only one missing now is ‘Mallrats’. I really like the premise of ‘Chasing Amy’ as it tells a wonderful story about love from different perspectives.  This package could have been so much more on Blu-ray if it was given the proper image and audio treatment. The special features are excellent with the addition of an all-new audio commentary for this release. If you already own the previous Criterion Collection DVD release, to some it could be hard upgrading. To me I think it is well worth the upgrade for the better image quality and the all new audio commentary.
Overall Rating: 7/10