Posted in DVD Reviews by George Theofanopoulos on 14 April 2011 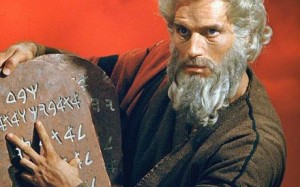 This 1961 version of Jesus’ story gives historical context to the best-known Biblical tale and features many memorable moments, such as a moving Sermon on the Mount and a vixenish Salome dancing for her stepfather in a performance that rivals today’s MTV video offerings. Orson Welles keeps the 168-minute film moving along with informative narration helpful to those who haven’t read the New Testament in a while. Made with backgrounds that resemble Southern California more than Palestine and a European and American cast–including a blonde, blue-eyed Jesus and an Irish-accented Mary–this movie has the definite stamp of Hollywood. 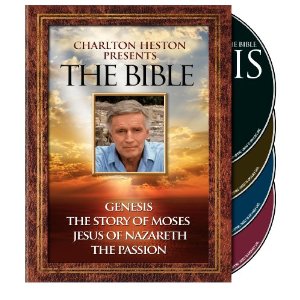 Heston, who was in Israel for the filming of this movie, would bring to life many of the scenes of Jesus’ life by talking about them at the actual place it happened. Rather, he mostly just appears in some drab ancient temple ruins quoting long passages of scripture for most of the movie, while you see ancient artwork to highlight specific events. Yes, at times you’ll see him wading in the Jordan River, and fishing on the Sea of Galilee, however these scenes are very short (around 30 seconds), then it’s right back to the drab ruins for some more scripture reading. The stories were told through the generations, stories of what had happened and what was to come. “The best stories there ever were ,” Charlton Heston says about these Biblical accounts. Academy Award® winner Heston (Best Actor for 1959’s Ben-Hur) takes viewers to authentic Holy Land locales, drawing on the King James text and his remarkable storytelling skills to narrate these inspiring tales rooted in faith. GENESIS In the beginning… Revisit the wonder of creation, the story of Adam and Eve, the time of Noah, the Great Flood and more. THE STORY OF MOSES I have been a stranger in a strange land… The clashes with Pharaoh, the Exodus and Red Sea’s parting, the 10 Commandments – all part of the tale of the leader and lawgiver. JESUS OF NAZARETH For unto you is born this day… Explore His ministry, miracles and message against backdrops that include the Jordan River, the Mount of the Beatitudes and more. THE PASSION Peace be unto you…. The Garden of Gethsemane, the Via Dolorosa and other sites provide settings for a powerful exploration of Jesus’s trial, crucifixion and resurrection.

Charlton Heston is to be commended for his fabulous job in this set. He brings the story of Jesus’ life on earth to life as he shows us the places where Jesus lived and taught, while interweaving the appropriate Biblical narratives. Charlton Heston’s dramatic readings give this DVD a truly emotional impact.