Posted in Blu-ray Reviews by George Theofanopoulos on 28 June 2011
When a naive, small-town insurance agent named Tim Lippe (Ed Helms, The Hangover) goes to a convention in the big city of Cedar Rapids, Iowa, his life gets turned inside out under the influence of three convention veterans. This sort of fish-out-of-water comedy could have been a flimsy excuse for broad slapstick and absurd high jinks; instead, in the confident hands of director Miguel Arteta (The Good Girl, Chuck & Buck), Cedar Rapids becomes something more humane and, in a quiet way, more ambitious. Helms manages to make Tim genuine, a man-child but not a cartoon; the movie’s situations skirt wackiness, yet always remain in the realm of something emotionally real. (The movie also reflects the influence of producers Alexander Payne and Jim Taylor, who created the similarly character-rich movies Sideways, Almost Schmidt, and Election.) 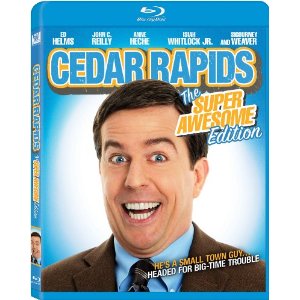 Cedar Rapids looked like the type of comedy that could go either way. The trailer seemed to hint at Ed Helms channeling his Stu Price character from The Hangover. In fact, that was my initial thought process going in; that Cedar Rapids would probably be an extension of Helms’ character in The Hangover. Other than the trailer being attached to one film before a screening, I’ve never seen the film advertised anywhere else as most haven’t seen anything relating to the film at all.

Cedar Rapids has its specific premise and agenda – it is yet another movie in Hollywood’s recent series of flicks made for one specific purpose: to fight “religion”. Many clues indicate that the War is not on just any religion.

This time the plot is around an annual convention of insurance agents in “big city” (Cedar Rapids, IA) and their coveted Double-Diamond Award. The tone of the convention is set by its president played by Kurtwood Smith. Smith’s character appears to be “religious” – he talks “God” a lot and leads prayer before meals at the convention much to the displeasure of… whom? You guess it, John Reilly’s character. Reilly has no patience for “religion”. Visibly disgusted with Smith’s “religion” Reilly calls him “f’ing Pope”.

Things develop towards inevitable twist: in the end antireligious Reilly comes out as the man of wholesome integrity and religious Smith is exposed as dishonest crook.
Movie Quality: 6/10

The print is presented in 1080p/AVC MPEG-4 with a 1:85:1 aspect ratio. Colors are very rich and vibrant throughout. Blacks are deep and preserving fine details, especially in the faces of the actors. Fleshtones are natural. There are times where film grain is subtle in some scenes, but gets heavier in darker scenes. The grain never gets intrusive or distracting. Overall the picture quality is pretty good with this release.
Print Quality: 9/10

The audio is presented in a DTS-HD MA lossless 5.1 mix. ‘Cedar Rapids’ is a more dialogue driven film with excellent audio for the premise of the film. With this being a comedy, there are no action sequences, so don’t come in expecting a bombastic mix. Dialogue is very clean and crisp through the center channel. We have more of a front heavy experience with the mix as dialogue also tends to pan between the front speakers. When the rears get are in use, you hear a few sound effects and the score.
Print Quality: 9/10

Cedar Rapids is a decent 90-minute getaway comedy for not having to think too hard, and full of quirky “low-brow” laughs. Although this same director made somewhat darker films “The Good Girl” and “Chuck & Buck,” Cedar Rapids doesn’t necessarily have the same cerebral feel as those films.
Overall Rating: 6/10