Posted in DVD Reviews by George Theofanopoulos on 27 September 2011 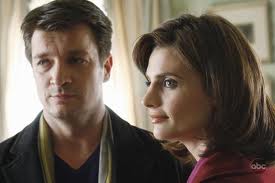 Famous mystery novelist Richard Castle and NYPD Detective Kate Beckett return for the suspenseful Third Season of ABC’s brilliantly funny series, CASTLE. Enjoy every inspired idea and flirtatious moment as this fiery duo solve the strangest homicides New York has to offer. It’s the most entertaining season yet as Castle’s wildly funny storytelling skills work their way into every case. Between his mixed-up partnership with Beckett and his relationships with his diva mother and his clever daughter, Alexis, Castle is always on his toes. Crime fighting has never been this much fun! Get on the beat and relive every wild and witty moment in this 5-disc DVD set. 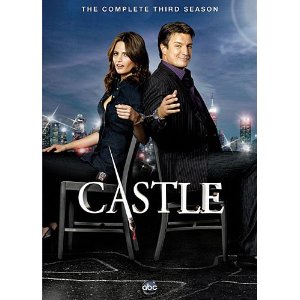 Season 3 brought “Castle” to one of those turning points in the life of any show. The justification for Rick Castle’s continued presence in the 12th precinct, Beckett’s search for those who murdered her mother, and of course, the three-year would-be romance between Castle and Beckett, have all come to a point where the writers have some serious decisions to make. Those decisions will, in season 4, either make or break the series.

The show works best when it sticks to a lighter mood, sort of a romantic “Murder, She Wrote” with clever plots, good dialogue, and sweet flirtations between the detective and the writer. It’s when the stories get too big and too serious – as with “Countdown” and the season finale, “Knockout”, that the characters seem out of their element and the episodes begin to collapse under their own weight. These instances have, fortunately, been few and far between but the writers do need to go softly and carefully from this point on.

So anyway, yes, get the season 3 DVD. It’s a worthy and necessary “transition season” that took us from the newness and novelty of the first two seasons to where we now know the characters well enough to have strong opinions of where it should all go from here.
Movie Content: 9/10

In conclusion this season was FREAKING AWESOME! I’m so excited for season four, and this show is highly recommended.
Overall Rating: 8/10