Two-time Academy Award® Winner Kevin Spacey delivers a “bravura performance” (The New Yorker ) in this “uproarious, riveting and wickedly hilarious” (Elle) film inspired by a true story. Spacey stars as Jack Abramoff, the real-life Washington power player who resorted to jaw-dropping levels of fraud and corruption. High-rolling excess and outrageous escapades are all in a day’s work for Abramoff, as he goes to outrageous lengths to promote the Indian gambling industry, earning him the nickname “Casino Jack.” But when Jack and his womanizing protégé Michael Scanlon (Barry Pepper) enlist a dimwitted business partner (Jon Lovitz) for an illegal scheme, they find themselves ensnared in a web of greed and murder that explodes into a worldwide scandal. 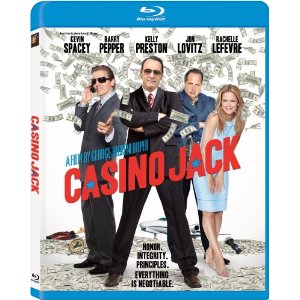 ‘Casino Jack’ chronicles the rise and fall of Washington lobbyist Jack Abramoff starring Kevin Spacey. The film begins with his indictment, followed by a flashback to the beginning of his career as a high-powered lobbyist. The film does not get too deeply into Abramoff’s activities in his younger days as head of the College Republican National committee and brief stint as a film producer. For information on his formative years, it is well advised to watch the excellent documentary about Abramoff entitled ‘Casino Jack and the United States of Money’.

At the basic level, ‘Casino Jack’ provides an informative but somewhat superficial review of Abramoff’s illicit activities (again, to be better informed, check out the documentary CJ and the US of Money). In the case of CNMI, sweatshop owners took advantage of the lax labor laws on the islands since the strict regulatory laws of the US did not apply. Abramoff got millions from these crooks to influence legislators to ensure that the sweatshop owners continued to exploit cheap labor imported from Asian countries. At one point, Abramoff is able to have Majority leader Tom Delay come out to the Marianas where he wines and dines him (including ubiquitous golf outings). Delay fails to make any deep inquiries regarding exploitation of the workers and is the later recipient of contributions to his campaign war chest and foundations from Abramoff. ‘Casino Jack’ further chronicles a setback that Abramoff must deal with–a new governor squashes Abramoff’s contract so later CNMI senators are paid off and the senate council reinstates the contract. The US of Money documentary provides a sad postscript: international treaties eventually add regulatory clout to the garment industry so the sweatshop owners pick up and leave, resulting in the destruction of the islands’ economy.
Movie Quality: 6/10

The print is presented in 1080p/AVC MPEG-4 with a 2:35:1 aspect ratio. Colors are vivid throughout the presentation. Black levels aren’t as deep. Flesh tones are accurate and natural looking. Details are also excellent. The print is pristine from any issues.
Print Quality: 9/10

The audio is presented in a DTS-HD MA lossless 5.1 mix. For those going in expecting an intense and complex audio experience you might be a little disappointed. The audio is great for a film that is dialogue heavy with crisp and clean sound through the center channel. There isn’t much going on with the soundfield in ‘Casino Jack’ so the rear speakers don’t get as much of a workout.
Print Quality: 9/10

For those who know nothing about the history of Jack Abramoff, ‘Casino Jack’ should be viewed as a basic primer on the events surrounding Abramoff’s rise and fall. The film’s scenarists do a fairly adequate job in covering the bases but much of what happens is not always easy to follow. That’s what happens when there is too much material available to condense. I would have preferred that the casting director chose someone else besides Kevin Spacey to play Abramoff.
Overall Rating: 9/10