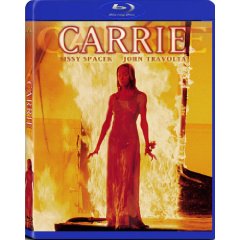 To this day, ‘Carrie’ still creeps me out as this is one of those films where bullying on the not so popular kid at school turns into a night of complete terror. The story comes from the twisted mind of Stephen King who wrote the novel and Lawrence D. Cohen would script King’s novel. Brain De Palma who is a critically acclaimed director would direct ‘Carrie’. ‘Carrie’ would gross a total of $25 million dollars at the box office with a $1.8 million dollar budget. The film has been released on DVD twice and now makes it debut in high definition on Blu-ray.

Stephen King’s ‘Carrie’ is a story about a high school girl Carrie White (Sissy Spacek) that wants to fit in, except she is treated like garbage by her school mates because she is keeps to herself and is shy in general. Right from the start of the film, Carrie is being made fun of in the girl’s locker room by Sue (Amy Irving), Norma (P.J. Soles), and Chris (Nancy Allen). The three girls end up getting into trouble by gym teacher Miss Collins (Betty Buckley) for the girls being cruel to Carrie in the locker room. Yet the detention isn’t enough to stop the girls, they decide that they will get back at Carrie for them getting into trouble.

We are introduced to Carrie’s mom Margaret (Piper Laurie) and if you thought the girls at school were the only ones causing mental stress to Carrie, her mother doesn’t help matters at all. Her mother is into religion and it influences how she treats Carrie. With Carrie getting older and hitting womanhood, her mother doesn’t see it in the right light. She starts to give Carrie extra stress on top of how she is being treated at school. All this stress culminates into ‘Carrie’ to unleash her telekinesis powers that she was never aware of having.

The plan is set into motion by Sue, Norma, and Chris as they decide that they are going to use her boyfriend Billy (John Travolta) to lure Carrie to the prom. The three girls want to get revenge on Carrie for having them get placed into detention. This prom which is supposed to be a High Schools Senior final hurrah turns into a nightmare that will be talked about years to come.

‘Carrie’ would have many breakout stars and at the time they were a cast of unknowns. Sissy Spacek, P.J. Soles, John Travolta, William Katt, and Piper Laurie would go on to have great careers in Hollywood.

Picture/Audio Quality
The print is presented in a 1080p encode with a 1.78:1 matted aspect ratio. While the print is 32 years old, this is the best that the film has looked. Where the DVD versions were heavy with grain, it has been toned down a bit with the Blu-ray version. The image is much cleaner than what we saw on the previous DVD versions, but there are still areas where there are scenes that are out of focus. The colors appear washed out with some vibrancy. Personally, I prefer that these older horror films from the 70’s don’t get completely digitized to the point where it takes away from the original intent of the print.

The audio is presented in a DTS-HD MA lossless audio mix. While this is not the fault of the film itself since it was never intended to have dynamic audio due to low budgets, there is very little coming through the surrounds. There were more sounds coming through the front speakers as expected. The dialogue is very clean and clear through the center channel.

Special Features
MGM releases both ‘Amityville Horror’ and ‘Carrie’ on the same day, yet we get two bare bones discs with only 1 supplement. This is a shame that the regular DVD features weren’t ported over to the Blu-ray. There were some good documentaries on the special edition DVD.

If you are a fan of ‘Carrie’, I can only recommend adding this film to your collection if you want the slightly better visuals and DTS-HD MA audio. ‘Carrie’ is a great film just in time for Halloween as Blu-ray is finally starting to get more horror films. These studios are not going to win over casual movie fans if they continue to deliver bare bones Blu-ray films at $30 a pop.