Michael Moore’s didactic documentary style is actually a source of inspiration in Capitalism: A Love Story. This film, which explores the history of incongruence between American capitalism and democracy, is evidently a culmination of Moore’s lifetime of research into this topic: he begins the movie by admitting his longstanding interest, rooted in childhood experiences in Flint, Michigan. As a result, the film displays an expertise that is less irritating than in Moore’s earlier works, in which various loopholes can be found in one-sided presentations (see Bowling for Columbine). Here Moore employs his trademark tactics to make a satirical documentary that functions as a film-based, grassroots political strategy meant to provoke revolt. 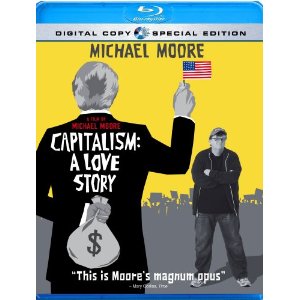 The story starts with people losing their homes–some of them in the famlies for generations–to foreclosure. Moore narrates this film more than showing himself doing some of the more outrageous maneuvers for which is is justifiably famous. He describes first that refinancing was marketed as the way to go. You need some money for a vacation? For some needs around the house? Refinance. But the fine print issued by those lending the money was really fine. And people found themselves with an affordable mortgage which grew, and grew, until the home owner simply couldn’t afford it any more. Than s/he lost the home. (In an early case, there were four members of a family in their house. Seven cars from the sheriff’s dept. came by to evict the residents!)

There has been quite a lot of controversy over such “sub prime” loans. We tend to look at the person who took out the loan as irresponsible if not completely stupid for having bought into something they couldn’t afford. Moore cites a study which indicates that 80 percent of the problem was the responsibility of those (wealthy) who made the loans, not those who got the loans.

And there’s more. He talked with a number of homeowners whose spouses died in the meantime. That was a kind of supplement to his film “Sicko.” Bills become impossible to pay; a family member is sick and the sickness therefore goes untreated and the victim dies simply for lack of money.

Further still, it seems some of our country’s major employers–not fly-by-night outfits but some of the wealthiest corporations in history–also had taken out life insurance policies on their employees who were ill. So, not only did the employee die because of lack of “resources,” but his or her employee made a lot of money off the employee!

The film was astute in pointing out issues that the “MSM” didn’t: There was Democratic resistance to the bail-out, and at first it didn’t pass. But then pressure was put on leading Democrats and some of the wealthiest among us had the US taxpayer cover up for their blunders. Afterwards, the taxpayer also covered their execs’ private, luxury jets, their bonuses. You have to see it to believe it.

It’s hard to do the film justice in mere words. It’s important that you see the film. I gave it only 4-stars partly because I expected it to be a tad more “entertaining.” One of Michael’s techniques that he uses astutely in this film–and entertainingly–is to attempt citizen’s arrests of the CEOs of many of the investment firms we’ve bailed out. He wraps a crime scene tape around I think it was AIG at the end–to the dismay of the employees and security staff of the company. Of course it’s completely symbolic, but funny, and he makes his point very clearly.

And Moore had some credible sources. One was responsible for the S&L disaster a few years ago. Some of the others I admire. For instance, Micheal talked to Catholic priests, the one who married him and his wife, and the other who married his brother and his wife. Then he talked with Bishop Tom Gumbleton. As I know as least one of those individuals, I admire their stance. But I also admit that Micheal cherry-picked them. He could have found priests (I know some of them too!) who’d naively defend the US system as if it were instituted by God himself.
Movie Content: 9/10

It is important, however, that people see this film–especially those less inclined to criticize today’s economy (including, if not especially, the bail-out). My wife comes from a conservative or at least indifferent family. She was moved by the suffering that individual Americans are enduring because of that greed. And Moore does a fabulous–and still somewhat entertaining–dimension to that which we all need to witness.
Overall Rating: 8/10