In the wake of King Uther’s sudden death, chaos threatens to engulf Britain. When the sorcerer Merlin has visions of a dark future, he installs the young and impetuous Arthur, Uther’s unknown son and heir, who has been raised from birth as a commoner. But Arthur’s cold and ambitious half sister Morgan will fight him to the bitter end, summoning unnatural forces to claim the crown in this epic battle for control. These are dark times indeed for the new king, with Guinevere being the only shining light in Arthur’s harsh world. Faced with profound moral decisions, and the challenge of uniting a kingdom broken by war and steeped in deception, Arthur will be tested beyond imagination. Forget everything you think you knowthis is the story of Camelot that has never been told before. 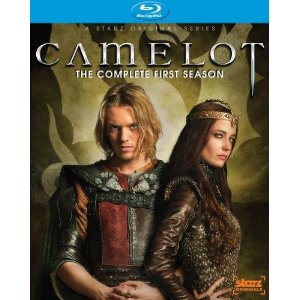 This show is terrible and the acting is flat and cheesy. Either that and they are doing the Joseph Fiennes version of scene chewing over acting. I have never seen him in worse form. The sets are obviously sets. They look like sets from a stage production. The props were the same as well as the costumes.

I did not mind the re-writes to the plot line of the Camelot/Arthurian legends. The worse part of it was the 90210 relationship between Arthur and Guinevere. It not only got to be grating and full of teen style angst, but it took up way to much time on the screen. Too much kissy kissy, too little of the kingdom building. There is just not enough interesting character expositions and action. The characters in short are boring. Even the King. Which is really bad. Because that is who is supposed to be the central character.

The sad thing is that the most interesting plot line with King Lot was stopped much to fast as the just killed him off. Sad that. Because Eva Green as Morgan is just boringtown. I have not seen a more unconvincing villain in a very long time. She is also chewing some scenery with her over acting.

This show was so bad that we did not even care to watch the last three episodes. Which is VERY disappointing because when I first heard about this show I was very very excited as was my wife. Now was are both disgusted. We had to go watch Excalibur just to wash the foul taste of Camelot from our mouths. Very disappointing indeed. I would give the show no stars if Amazon let me do it.
Movie Quality: 5/10

If you haven’t seen this series, find it online first before you purchase. It’s full of inconsistent writing and mis-casting.
Overall Rating: 6/10