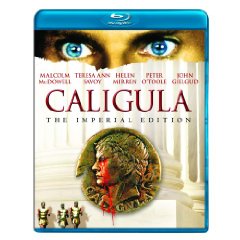 This movie tells the story of Caligula, one of the later emperors of the Roman Empire, the one most noted for his sexual depravity. Apparently Gore Vidal had a script for a miniseries that he was having trouble finding funding for. He had the idea of approaching Penthouse Magazine founder Bob Guccione, who agreed on two conditions: that the script be turned into a theatrical sword-and-sandal blowout, to be called “Gore Vidal’s Caligula,” and that hardcore sex be cut in, to appeal to Penthouse readers. Then the fun began: they roped in big-name actors who were under the impression that they were making a serious film [which it is], but things started to awry between Vidal, the director, Tinto Brass, and Guccione, who had a totally different idea of what the film should be.

Caligula (Malcolm McDowell) is the grandson of the Roman Emperor Tiberius (Peter O’Toole) as his father Germanicus, was adopted by Tiberius. Instead of choosing his grandson by blood to be his successor, he chooses Caligula. In the process Caligula is having an affair with Drusilla (Teresa Ann Savoy). As soon as Caligula becomes emperor, he has to reproduce an heir to rule. Caligula is in love with his sister Drusilla whom he has had affairs with the last few years. He can’t marry her since it is forbidden. He ends up marrying Caesonia to be his wife, and so the madness begins.

The print is presented in 1080p/AVC MPEG-4 with a 2.00:1 aspect ratio. In what has to be one of the strangest aspect ratios that I have ever seen, it works with this film. While this film does not have the prettiest looking transfer, for fans of the film it will be enough to make them happy. Colors are dull and drab looking. There is a significant amount of film grain which can get heavy at times. Flesh tones are accurate. While there is some dirt in the print, it is nowhere near a distraction.
Video Quality: 2.5/5

The audio is presented in DTS-HD MA 5.1 lossless mix. There isn’t much going on in the soundfield in terms of ambient sound. Dialogue is clear and crisp with no hiccups.
Audio Quality: 3.5/5 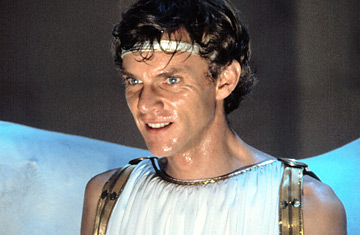 Disc 1 is on Blu-ray with multiple commentaries involving Mirren and McDowell. Disc 2 is available on SD-DVD with several featurettes and more interviews. The DVD-ROM includes tons of Penthouse articles, interviews, and the original screenplay.
Special Features: 3.5/5

‘Caligula’ is not a film for everyone and it is one that’s harder to follow due to the convoluted direction of the story. On Blu-ray the film looks and sounds better than the previous DVD release. For fans of this film, this release on Blu-ray will make you happy while for those curious I would recommend a rental.
Overall Rating: 3.5/5 (Rental)