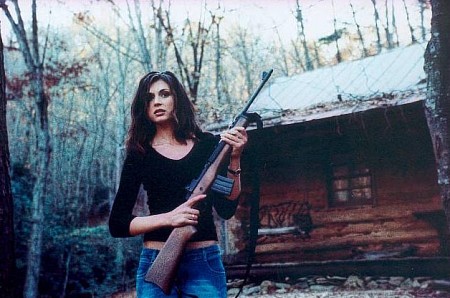 A sneaky and surprisingly smart horror flick, Cabin Fever sets up all the cliches of its particular subgenre (what might be called the “sexy young people go into the woods” horror movie, featuring hostile redneck locals, dead animals on hooks, cars that suddenly stop running, etc.) and by the end has played a clever twist on every standard element, often to darkly comic effect. What’s the plot? Well, five young people go to an isolated cabin where they contract a nasty bacteria that eats their flesh; this, combined with a bad-tempered dog and a party-loving police deputy, leads everyone into confusion and bloody chaos. Some of the ironic twists are a little obvious, but most of them effectively subvert your expectations to entertaining effect.

After seeing “Wrong Turn”, I didn’t have any doubts about seeing “Cabin Fever”. One of the primary reasons I saw “Wrong Turn” was because I was familiar with, and liked most of the actors (or actresses) in the movie and of course my love for horror films. It also helps when a small budget horror movie has some familiar faces attached to it.

“Cabin Fever” is about a group of five friends (3 guys, 2 girls), who have just graduated from school, and now are going to the mountains for a camping trip in a cabin. However when they get there, there is a deadly virus on the loose, which is being contracted by a hobo who lives out in the woods. Bert (James DeBello) is the first to come into contact with the hobo, when he accidentally shoots him with a bee-bee gun, thinking he’s a school. The hobo then trys to get Bert to help him, but Bert runs away. The Hobo then interrupts a bon-fire the group is having, and is accidentally set on fire, which for some sick twisted reason is very funny. Some way or another, his dead body ends up getting into the water system, and those anyone who drinks the water becomes infected.

When they find out that the disease is within them, Jordan Ladd then goes into hiding. There’s also some crazy group of rednecks running around (which seems to be the staple in horror movies right now) who are trying to kill the kids in the cabin.

With a very likable and funny cast, and interesting (but totally unrealistic) storyline, and plenty of jokes and wild rednecks running around to entertain you, you should definitely check this movie out if you haven’t seen it. Especially if you liked other movies or shows the cast has been in, you’ll like this one.
Movie Content: 9/10

The print is presented in 1080p/AVC MPEG-4 with a 1.85:1 aspect ratio. For a film that was rather gritty presentation on DVD, has been cleaned up rather nicely on Blu-ray. Colors are strong with reds and greens taking center stage as we do spend a lot of time outside in the forest. Fleshtones are natural looking. Blacks also have an inky look to them during the daytime scenes, but there were darker looking scenes that took a hit. Details are very well done considering how out of focus this film looked on DVD. There is some slight grain throughout the film, which isn’t distracting at all. Overall
Video Quality: 9/10

The audio is presented in DTS-HD MA lossless 7.1 mix. This DTS-HD mix has brought the film to life adding an immersive soundtrack. The effects coming out of the surrounds during the horror scenes and really immerse you in the on goings of the film. The score sounds very good throughout the film. It just adds more to the atmosphere in this film. Dialogue is clean and crisp through the center channel.
Audio Quality: 9/5

I am a huge fan of the original ‘Cabin Fever’ and pleased that this is finally making its way on to Blu-ray in less than 2 weeks. Both video and audio are excellent, with the video holding very well to the original intent of the film. All the special features from the DVD release are ported over which if you still own the DVD, time to upgrade. If you are a fan of horror films, you owe it to yourself to check out Eli Roth’s directorial debut if you have still not viewed this film a mere 6 years later. I do recommend staying away from the sequel which releases the same day as this Blu-ray release of the original.
Overall Rating: 8.5/10