Posted in DVD Reviews by George Theofanopoulos on 07 July 2011
A skeptical college professor discovers that his wife has been practicing magic for years. Like the learned, rational fellow he is, he forces her to destroy all her magical charms and protective devices, and stop that foolishness. He isn’t put off by her insistence that his professional rivals are working magic against him, and her protections are necessary to his career and life. 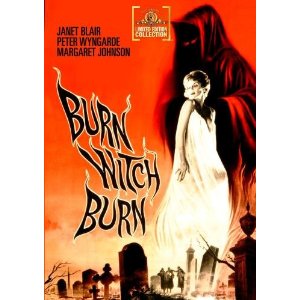 Although it’s seldom mentioned in critical surveys of classic horror, BURN, WITCH BURN (aka Night of the Eagle) is a terrific example of how far a film can travel on mood and characterization. When a college professor learns his wife has been practicing black magic, he orders her to throw out or destory all her charms and occult items. What he doesn’t count on is that other practioners of the “dark arts” won’t stand idly by while one of their own is forced to give up her witchy ways.

BURN, WITCH BURN bears a favorable resemblance to Jacques Tourner’s excellent Curse of the Demon / Night of the Demon: Moody black & white photography, strong performances, and a lead character who is doggedly determined to debunk the supernatural, even though he is surrounded by overwhelming evidence of its existence. This culminates in a still nail-biting supernatural attack by a giant bird (hence the otherwise rather misleading “Night of the Eagle” alternate title for the film).

Fans of CITY OF THE DEAD (aka Horror Hotel) and NIGHT OF THE DEMON (aka Curse of the Demon) will want to add BURN, WITCH, BURN (aka Night of the Eagle), a sophisticated British shocker, to their collection.
Overall Rating: 8/10