Before Sam Axe teamed up with Michael and Fiona, he was Commander Axe, U.S. Navy SEAL. The Fall of Sam Axe tells the story of how Sam went from respected Naval Commander to the man of mystery we’ve come to know on Burn Notice. 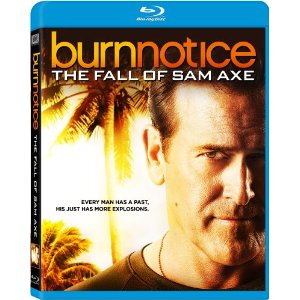 What we learned from this movie is that Bruce Campbell can only play one type of character. Fortunately he does it well. You know this is going to be a comedy from the beginning when Campbell as Sam Axe is escorted by two SPs, with serious swagger music, through mis-operating gates and doors. Sam is a Navy Seal. He is not the “kill Bin Laden” type SEAL but the have sex with the admiral’s wife (Chandra West) type of SEAL. This lands him on a job in Columbia dressed in camouflage garb designed to hide someone in the middle of the Atlantic.

In Columbia, while looking for terrorists, things take a twist and then another, and another. Kiele Sanchez plays a clinic doctor and was marvelous in her role. And of course what would a Bruce Campbell movie be without a chainsaw? Acting is not something Bruce Campbell does well, but we love to watch it anyway. The twists is what made the movie humorous.
Movie Quality: 6/10

The print is presented in 1080p/AVC MPEG-4 with a 1:78:1 aspect ratio. Colors are vivid and rich throughout the entire presentation. Fleshtones are natural without any digital work. Blacks also have an inky look to them. Details are exceptional showcasing what a great print that FOX has put together. There is some grain throughout the film, which isn’t distracting at all.
Print Quality: 9.5/10

The audio is presented in a DTS-HD MA l0ssless 5.1 mix. This is a very immersive soundtrack during the action sequences. This is a film where there are a lot of action and chase sequences. Those looking for an audio mix that will take advantage of your equipment, this is the film for you. This is a very well done audio presentation that has dynamic range with the sound effects and a lot of panning from speaker to speaker. Dialogue is clean and crisp through the center channel.
Print Quality: 9/10

It just seems like it was rushed into production to fit in between seasons of the series and it shows. Chemistry is hard enough to get between characters I don’t know why they messed with it. I would only recommend this for fans of the show.
Overall Rating: 6/10