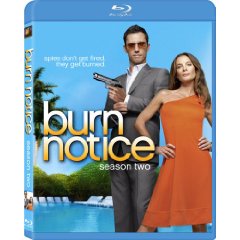 I did not start watching this show until after the 1st season aired. The concept of the show just didn’t seem appealing, but a friend of mine did encourage me to view the first season. I became a fan almost instantaneous upon viewing the first episode.

I am relieved to see Burn Notice hasn’t suffered from a sophomore slump. The acting, plot, and amount of guest stars were just as good as the first season. Then add that the season ends with a gratifying cliffhanger which instills both excitement and impatience for the next one. That said, there are a few irksome problems with the series.

For one thing, while the main story arc is fascinating, a few characters meet abrupt (and icky) resolutions way before we’ve had time to get to know them. Secondly, I hope we get a break from the fractured family stuff. Michael’s sleazy brother Nate is a welcome distraction, since he always brings with him buckets of trouble and is a capable sidekick. Michael’s mom is a big teddy bear now, and it’s a weak point dramatically…especially since this family’s various past traumas are soothed with frequent happy conclusions where everyone remembers to hug. That is my only weak point of the show, that is how the family bits have steered.

Jeffrey Donavan, Gabrielle Anwar, and Bruce Campbell really are what make this show great. I love the dry wit and interesting spy facts that are shared, all over a compelling storyline. The main storyline behind the show (who burned Michael and why) is still a mystery after 2 seasons, but you don’t get frustrated that the main plot point has not been solved.
Movie Content: 10/10

The print is presented in 1080p/AVC MPEG-4 with a 1.78:1 aspect ratio. While this is not the worst transfer that I have seen on Blu-ray, FOX has taken the lazy route here with the encoding by cramming 16 episodes across 3 discs. I am baffled a bit as to why this decision was made, but 5 discs would have made more sense. This is a print that appears to not have had much work done to it when it was minted on Blu-ray it appears to some as an upconverted DVD. The more episodes that I watched, I never felt like the print got any better. There was a problem with colors not looking properly. Colors have an oversaturated look them. While this is not the worst part of the disc, it is enough to detract many.

Then add the issue of noise and grain which is my biggest issues with this print. I found noise to be way too heavy, then mix an absorbent amount of grain to the print and you have a mess. On top of that issue then you have the problem of whites being overblown as you can see in Bruce Campbell’s white t-shirts. Then there is a problem where details are hit hard where they are out of focus and it makes you wonder if you are still watching a DVD film. This is a real disappointment as I have become a huge fan of the show to see such a mess. When a show like ‘Dexter’ which is also based on the same locals looks amazing, this television show does not.
Video Quality: 3/10

The audio is presented in DTS-HD MA lossless 5.1 mix. The audio mix with this show is good on Blu-ray, but not as great as I would have expected. I place it a notch above the DVD Dolby Digital 5.1 mix and that is a shame too since this is a DTS-HD mix. I just never felt that the audio was a bombastic like it should have been for a show of this type of content. I did find that the audio through the center channel was clear with no issues. This is a television show that needs to have the viewer immersed and could have been a real treat. I hope for Season 3 that they do a better job with the Blu-ray.
Audio Quality: 5/10

I am a huge fan of ‘Burn Notice’ and season two continues the great acting and plot of the first season. I am very disappointed with the video and it is a real shame that no treatment was given in this area. If you can find the television show on Blu-ray at a good price, I would say to go for it. I would not pay full price for this and the issue is that television shows on DVD as an example do not get a re-release unless they are Star Trek.
Overall Rating: 6/10