Posted in DVD Reviews by George Theofanopoulos on 18 November 2009 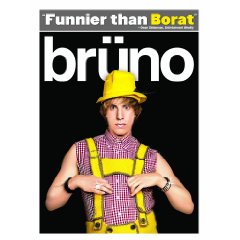 The brilliant British comedian Sacha Baron Cohen dips into his stable of pre-existing characters and comes up with a big-screen vehicle for Brüno, a gay Austrian fashionista. Brüno is blond, fame-hungry, and prone to wearing unexpected combinations of lederhosen and hot pants. But it’s his runway disaster with an all-Velcro suit that gets him barred from the Milan fashion scene and leads to the cancellation of his TV show. (“For the second time in a century, Austria had turned on its most famous man,” he complains.) Clearly, he needs to go to America and share his philosophy–or at least become a celebrity in whatever way possible. Brüno rolls out in a fashion similar to Borat, a combination of a scripted through-line interspersed with scenes of Baron Cohen improvising with people who don’t realize they’re being set up, Candid Camera-style. About half the time, this reaps some healthy laughs: a sequence with Brüno sitting down for a conversation with a “de-programmer” who claims to cure people of their homosexuality is on-topic, and there’s a wild series of interviews with parents so desperate to get their kiddies into showbiz they’ll agree to all manner of dangerous and irresponsible childcare. A lot of the humor isn’t about Brüno’s gayness at all; Baron Cohen is at his best when displaying freakish comic bravery (sitting across from a terrorist, he advises that “Your King Osama looks like a dirty wizard”). But the other half of Brüno simply misses the movie’s best targets–homophobia and celebrity culture–by miscalculating the nature of ambush comedy. When Baron Cohen gets former Presidential candidate Ron Paul in a hotel room and begins to undress, Paul isn’t showing bigotry by storming out (except in his language); he’s understandably reacting to obnoxious behavior in a supposedly professional situation. Too many set-ups fall short of the mother-lode pay dirt that Borat so frequently hit, leaving this a distinctly lesser item in the Baron Cohen portfolio.

Sacha Baron Cohen first came to the attention of the world media with his brilliant character known as Borat, a Kazakhstani reporter who went to America to make a documentary about American life. Mixing real interviews that mock the prejudices of those he is interviewing with a tagged on plot to move the film along, Borat was a massively surprising success. Now with Bruno, Cohen’s last character to not have his own feature film was set to become an equally successful piece but due to the success of Borat, I found it hard to believe how Cohen could go out there and make a movie as another character without being recognised. Luckily he didn’t have any problems and actually produced a movie that I found to be equally funny, if not better than Borat.

He proves that once again with “Brüno,” a mockumentary from director Larry Charles. This movie is just plain funny. It’s audacious at a level I’ve rarely seen, and truth be told, I wouldn’t mind seeing more of that kind of filmmaking. Instead of a Kazakhstani journalist, Cohen plays a flamboyantly gay Austrian fashionista who makes it his mission to become more famous than Hitler. If that alone doesn’t make you laugh, do yourself a tremendous favor and forget you’ve ever heard of Cohen. You must be in on the joke. That shouldn’t be too hard for most audiences, I suspect. What he says and does as the title character is so over the top that it’s difficult to not see it as one big joke. It seemed, however, pretty difficult for the people involved with the film, most of whom were ordinary citizens that had no idea who Cohen was or what he was doing. I initially had a hard time getting that through my head, considering how well known he is. Then again, the people he interacts with would probably not go out of their way to see a film like “Borat.”

After success eludes him in his native Austria, the scantily-dressed Brüno decides to try his luck in Los Angeles. But it immediately proves more difficult than he thought it would be, prompting him to travel from city to city with his head-over-heels assistant, Lutz (Gustaf Hammarsten). He tries acting. He tries pitching a celebrity interview program. He tries getting involved in a just cause. He tries swapping an African baby for an iPod. He even tries going into therapy to cure him of his homosexuality, because, obviously, all the cool celebrities are straight. At one point, he tries to prove he loves women by competing in an Arkansas cage fight, attended by a rowdy, beer-swilling group of homophobic rednecks with murderous glints in their eyes. Were there no cameras there, were there no film crew, I’m not convinced Cohen would be alive today.
Movie Quality: 8.5/10

The print is presented in 1.78:1 aspect ratio. The film keeps the documentary look and feel through and through. There are some scenes that do look pristine and clean for a documentary. Colors are dull and flat looking. Black levels are good but not the strongest.
Video Quality: 8/10

The audio is presented in Dolby Digital 5.1 mix. This is more of a dialogue driven film which is clean and crisp. The soundtrack really takes advantage of the soundfield when in use. Techno music is what’s used with the soundtrack making this a groovy sounding film.
Audio Quality: 8/10

I think what really singles Sacha Baron Cohen out from the reality entertainment crowd is his ability to critique culture from so many angles and perspectives. Stern is always Stern and we are used to his sensibility and because we know what to expect it ceases to shock but Baron Cohen with his multi-character approach continues to be provocative and to challenge us on many cultural fronts.
Overall Rating: 8/10