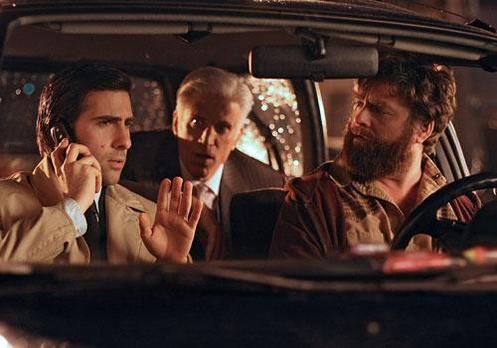 When we last dropped in on Jonathan Ames – New York writer, romantic, unlicensed private detective – he was taking a pounding in the boxing ring while still licking his (more painful) breakup wounds. Now that his second novel has been completed (and rejected), Jonathan is augmenting his income by moonlighting as a creative-writing teacher, while taking on some new, desperate clients, ranging from a kinky policeman to the publishing rival of his sexagenarian pal, George Christopher. How he solves anything is a mystery.

After the insanely funny, original and stylishly quirky Season One, I seriously doubted that the creator of “Bored to Death”, the real Jonathan Ames, would be able to match, much less surpass, what I so admired about his HBO series. But I’m happy to say that the adventures of Jonathan (Jason Schwartzman), George (Ted Danson), and Ray (Zach Galifianakos) continue in high hilarity and unmatched style.

As the season opens we find Jonathan, as usual, down on his luck. His second novel has been rejected and he has to pay back his advance to his publisher (we don’t see Bebe Neuwirth this season, worse luck). To help make ends meet, he is teaching a night class in writing at a Brooklyn public high school. The class, in Ames’ gifted hands, offers all kinds of opportunities for fun, from a dark, angry Asian writer to a Lolita-like student who has an immediate crush on Jonathan. Jonathan is a bit ashamed of this venue, but as always, aspires earnestly to please.

Ames explores some of society’s taboos this season, played out in Jonathan’s now full-time occupation as an unlicensed private detective. S and M, adultery (of course), transgenderism, menage a trois, all are explored with Ames’ usual witty, sometimes uproarious, but always somehow endearingly earnest, goofiness. He borrows from older movies (“Chinatown” and “On the Waterfront”, even “Casablanca”) and once again I am reminded of Woody Allen, but Ames puts his own stamp of genius on these monoliths, and makes them his own.

Some old friends re-appear — Oliver Platt and Kristen Wiig among them — and some new ones enhance the episodes (Kevin Bacon, F. Murray Abraham, Mary Kay Place). But always it is the magical chemistry of Schwartzman, Danson, and Galifianakos that make it work. “The Onion”, in reviewing the series, said Ted Danson hasn’t seemed to have this much fun since “Body Heat”. That may be true, but how lucky for us! And I have to put a plug in here for Jason Schwartzman. He is absolutely the center of the show, so funny, so literate, so horny, yet somehow so innocent and just plain nice. I love this character. The series has been renewed for a third season, and I await it eagerly.
Movie Content: 9/10

The beginning is a little slow, but “Bored to Death: Season Two” retains its quirky balance of comedy and drama. And it really, really makes you wish the third season was here already.
Overall Rating: 8/10