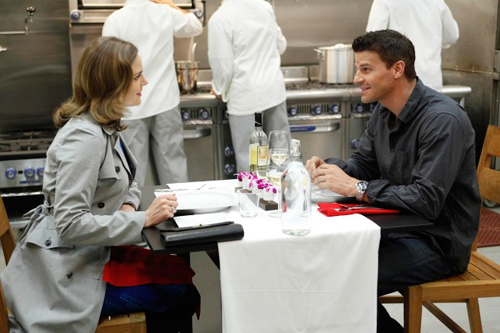 Dr. Temperance Brennan (Emily Deschanel) and Special Agent Seeley Booth (David Boreanaz) are back for more mystery, murder, and mayhem in the fifth season of Bones. Relying on Brennan’s unparalleled scientific abilities and Booth’s street-wise instincts, the sexy, crime-solving duo and their team face everything from modern-day witches to murdered rock-n-rollers as they scramble for evidence to stop a gruesome serial killer. This spectacular new season brings a wedding, the show’s landmark 100th episode, and decisions Bones and Booth must make that could change their lives forever. 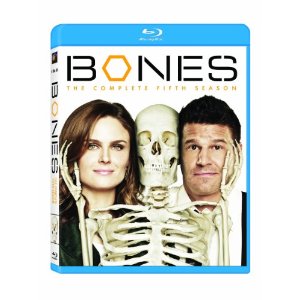 At the beginning of the fifth season of the wildly popular forensic drama “Bones,” many viewers tuned in trepidatiously after the spectacularly strange fourth season finale. Thankfully, all fears were allayed and relieved when the fifth season kicked into high gear in the very first episode and maintained that pace throughout the season; “Bones”‘ fifth season is perhaps its greatest yet.

The one thing that has always set “Bones” apart from the countless other procedurals on the airwaves right now is the focus on the characters solving the crimes rather than the crimes themselves, and the strength of this approach shines through brilliantly in every episode of this season.

David Boreanaz and Emily Deschanel return to the roles of Booth and Bones and deliver their strongest performances yet as each character is shaken to their core. As Booth struggles to regain his sense of self, he has to confront the knowledge of his feelings for his partner, while Bones herself goes through a whirlwind of emotion as the emotional barriers she has erected around her heart begin to crumble down, leaving her questioning not only herself but her relationship with Booth as well as her work at the Jeffersonian itself. The tension between the two has never been more delicious or more addictive, and both lead actors knock their roles absolutely out of the park.

But while the relationship between Booth and Brennan becomes increasingly more complex, the wonderful supporting cast of engaging characters at the Jeffersonian keep the show moving along briskly and lightly. Cam (Tamara Taylor) must run the lab while dealing with the challenge of being a good mother, guiding the team effectively toward each conclusion; Sweets (John Francis Daley) continues to provide invaluable insight into the minds of the team; Angela (Michaela Conlin) remains the emotional heart and soul of the team as she opens her heart to love’s possibilities; and Hodgins (TJ Thyne) struggles with his feelings for Angela as he returns to his abrasive, loveable self.

The cases themselves have regained a fascinating light as the mysteries the team confronts become more complex, and the special effects department has outdone themselves in the gore and goop department this year as Booth and Bones investigate some of the most gruesome crime scenes in history, all moved along by the brisk black humor the show excels at; the team investigates a possible secret agent locked in a truck for days, a would-be rocker torn to pieces by an industrial washer/dryer, a gamer literally melted in a vat of fast-food grease, and a dozen more cheerfully disgusting cases where the outcomes of the mysteries hold the power to shock and surprise the audience; the writers have once again caught the perfect balance between the whodunnit and the drama to craft a truly unique show.

But it’s not merely the cases that hold the viewers’ attention this season; season five is full of true powerhouse episodes: heartbreaking cases like “The Plain in the Prodigy”; darkly comical shows like “The Beautiful Day in the Neighborhood”; truly shocking mysteries like “The Proof in the Pudding,”; and even a historically fascinating case written by the author of the original Temperance Brennan novels Kathy Reichs herself (“The Witch in the Wardrobe”) — however, all of these merely lead up to the three knockout moments of the season:

In the fifth season, “Bones” reaches its 100th episode, “The Parts in the Sum of the Whole.” Likely the most beloved and most contested episode in the show’s history, the 100th episode completely redefined Booth and Brennan’s relationship as it showed the viewers the pair’s first meeting, something never before revealed, and circles around to one of the most hearbreaking and yet most powerfully hopeful moments of the series. “Parts” was also directed by David Boreanaz, one of the series’ leads, and the sheer emotion wrung out of Boreanaz and Deschanel by the end speaks volumes to the talent of the show’s leads.

As the series continues, however, the characters were shocked to their cores as they were forced to come face-to-face with their most terrifying adversary yet: the cunningly frightening sociopath dubbed The Gravedigger, in “The Boy with the Answer,” a nail-bitingly tense hour of television that had viewers’ hearts pounding as Heather Taffet, the Gravedigger, proved that her true arena was the courtroom, tearing apart her victims and throwing the entire future of Brennan’s life into question.

This only segues into the season’s amazingly dramatic finale, “The Beginning in the End.” As the team investigates the home of a hoarder, Bones questions what she truly wants to do with her life, Booth’s past comes calling, and Angela’s father blows back into town, all leading to a truly shocking season ender, a masterful finale that not only redefined the very foundations of the show and the characters but also contined to set the show on a rising point, ensuring that every faithful viewer of “Bones” will be frantically waiting for the sixth season to premiere in the fall.

In the past five years, “Bones” has redefined the procedural while producing a truly unique show filled with drama, comedy and the most satisfying romantic tension between two characters in years. Featuring challenging cases, intriguing mysteries, gruesome discoveries, fascinating character interactions, and truly touching and shocking turns in the lives of a cast of characters an increasingly growing fanbase have come to know and genuinely care about, “Bones” has proven that it still has plenty of tricks to show, and this wonderfully strong drama will remain on television for seasons to come.
Movie Content: 9/10

The print is presented in 1080p/AVC MPEG-4 with a 1.77:1 aspect ratio. ‘Bones’ looks very good on Blu-ray as many FOX television shows do. Colors are strong throughout each episode. Blacks were deep. With strong colors and deep blacks, they help translate into some fine details that at times weren’t as consistent.
Video Quality: 8/10

The audio mix is presented in DTS HD 5.1 Master Audio lossless track. Since this is not an immersive audio experience, there isn’t much going on in the soundfield. This is a show that is dialogue driven with the center channel receiving the most activity. Dialogue is clean without any audio issues like hissing or scratching which happens at times with other television shows.
Audio Quality: 9/10

Disc 3:
Episode Commentary
The X in the Files Extended Version

BONES is far, and away better than all of the other procedurals on the air. The two leads ( Emily Deschanel, and David Boreanaz ) are hands down the best romantic couple around, and the supporting cast is pitch-perfect.
Overall Rating: 8/10