Posted in DVD Reviews by George Theofanopoulos on 25 September 2011

The always-welcome Dana Delany makes a vivaciously prickly return to television in this entertaining medical whodunit, which finds its groove after a fairly shaky start. Creator Christopher Murphey’s premise draws inspiration from both Patricia Cornwell’s Kay Scarpetta novels and the origin of Marvel comics’ Dr. Strange: after injuring her hands in a car accident, an arrogant former neurosurgeon named Megan Hunt must adapt to a new life as a medical examiner in Philadelphia. As Hunt applies her knowledge to a steady stream of unsolved murders, her unconventional methods put her at odds with the police (John Carroll Lynch and The Wire‘s Sonja Sohn) as well as her lab mates (including Jeri Ryan and Geoffrey Arend, who gets to meet cute with real-life wife Christina Hendricks in one episode.) 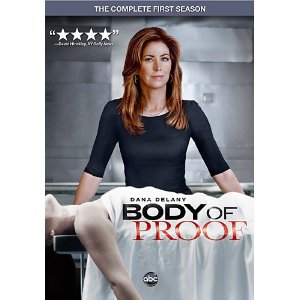 The concept is tired so we find ourselves with yet another crime show which pivots around the pathologist but this time for Philadelphia. However, Dana Delaney did a first class acting job on DESPERATE HOUSEWIVES so I was willing to give her a try on her own show. The character had problems with her hands so had to change specialties from neurosurgery to pathology. This is quite a step down both in status and money in the medical world but she was left with little choice. So she is very over qualified to do autopsies. Hence, she horns in on every one else’s job because she gets bored with just cutting up dead bodies. This the detectives find very annoying as she inserts herself into their cases.

Delaney is very good but everything else on this show needs work. The show especially needs a foil for Delaney. Although they are trying a host of characters with her as colleagues, plus a daughter and ex-husband, there is no one who qualifies as her foil yet. She is a Scully looking for Mulder or a Spock looking for Kirk.

The cases are good but they don’t stand out from the enormous amount of other pathology crime shows presently overstuffing American tv. So somehow this show needs to get distinguished from all of these other shows with some scintillating episodes.
Movie Content: 7/10

For those of you who enjoy CSI or NCIS but are sometimes a little bit disturbed by the gory images and violence common in those shows, this might be a great solution- there’s still mystery, drama, science, and intrigue.
Overall Rating: 6/10