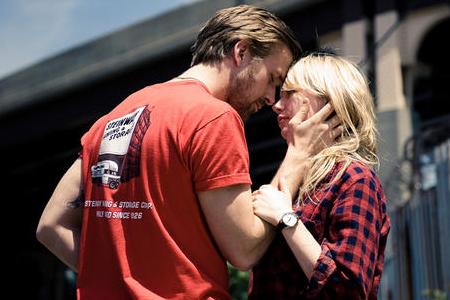 Love blooms and dies at the same time in the delicate dance between Oscar nominees Ryan Gosling (Half Nelson) and Michelle Williams (Brokeback Mountain). Gosling’s Dean, a high-school dropout, works for a New York moving company. While relocating a frail widower into a retirement home, he spots Cindy, a nursing student who’s visiting her grandmother, but the film actually begins six years later. Married with a daughter, they live in rural Pennsylvania. Heavy drinker Dean’s looks are fading, while Cindy still turns heads. In his elegantly constructed second feature, writer-director Derek Cianfrance pirouettes between past and present, with each scene commenting on the next (set to the bittersweet tones of Brooklyn band Grizzly Bear). The Dean of the early years pursues Cindy, who resists at first, but a spontaneous date ends with her tap dancing (badly) and him singing (not so badly). She leaves her domineering boyfriend (Mike Vogel) for this attentive stranger, leading to scenes of intimacy that are far more suggestive than pornographic–even if the MPAA briefly rated the film NC-17. Later, when the family dog goes missing, the cracks in their marriage intensify, so Dean arranges for a night of romance, which plays out like a negative image of their first date. If the two actors, who are very good, are meant to carry equal weight, Gosling has the more difficult task. It’s harder to like the clingy, insecure Dean, who loves more intensely and less wisely, but that makes Gosling’s the braver performance. 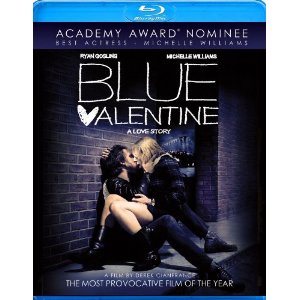 There are some films that manage to simultaneously warm the hearts of moviegoers and break them. “Blue Valentine,” the first major film from writer/director Derek Cianfrance, plays tug of war with your heart for its entire running length. It is a stunning debut from Cianfrance that takes a familiar tune and strips it down to its most raw and unflinching form. This is a film that lives and breathes, as we experience the flames of love being extinguished before our very eyes by the harsh realities of life.

“Blue Valentine” stars Ryan Gosling and Michelle Williams, two of Hollywood’s most talented and courageous actors, in a very low-budgeted, non-Hollywood film that centers on the rise and fall of a young couple’s relationship, as they fall out of love after years of marriage.

The film begins in the present, and then skips back and forth through time, showing the young couple at two different times in their relationship, from first time that they met to their now doomed and dissolving marriage. Structurally, this can sometimes be a distracting and confusing ploy to make a story of falling romance seem more interesting than it is. That is not the case here, and the film is wonderfully edited.

Gosling plays Dean, once a childish but devoted guy who has no big plans for the future except to keep on living each day, waiting for whatever the world has in store for him. He is a nice guy, but as the films reverts the present, we see that being a nice guy is not enough to sustain a happy marriage.

Dean’s tendency to sit back and be content eventually becomes too much for Cindy (Williams) to deal with. She is a charismatic girl in the beginning who wants to be a doctor one day. When she meets Dean for the first time in the nursing home where her grandmother lives, and where Dean, working for a moving company, is moving in an elderly man, their eyes connect. In that moment, the two actors make us believe that this is something special.
These scenes in the past are so wonderfully acted, as the naïve and passionate lovers connect and embrace, make love and share each other’s dreams. These passages in the film make it all the more painful when we are reminded of the present, where the passion and honesty are dissolving at a rapid pace. They also have a daughter named Frankie (Faith Wladyka) who was not planned, but who is accepted and loved deeply by her feuding parents.

The print is presented in 1080p/AVC MPEG-4 with a 1:66:1 aspect ratio. The film is very colorful throughout. Colors are vibrant carrying a more natural color palette. Blacks are also very strong and deep. With strong colors and deep blacks, it brings out the fine details. Details are very good. Fleshtones also look very natural. The print is as clean as a whistle with a very pristine look. There is some noise in the background, but nothing distracting.
Print Quality: 9/10

The audio is presented in a DTS-HD MA lossless 5.1 mix. ‘Blue Valentine’ is mainly a dialogue driven film. Dialogue through the center channel is very clean and crisp. The music on this soundtrack is what mainly pushed the audio in the soundfield. The rears would mainly get some action when music would play or the use of any effects.
Print Quality: 8.5/10

This film is a work of art that realizes that in life, there are few easy paths to take. Many questions go unanswered and many days pass unremarkably. From what I have come to understand, the method by which Cianfrance and the two stars handled the material was through much improvisation, which allows for spontaneity and authenticity if handled well. Williams and Gosling are so astonishingly intense and real in this movie that at times it is difficult to watch.
Overall Rating: 8/10