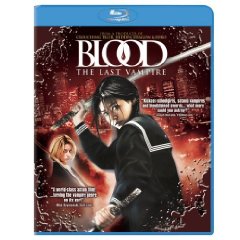 The deadliest assassin to stand the test of time. From a Producer of Hero and Crouching Tiger, Hidden Dragon comes Blood: The Last Vampire, based on the cult hit anime series. Demons have infested Earth. And only one warrior stands between the dark and the light: Saya, a half-human, half-vampire samurai who preys on those who feast on human blood. Joining forces with the shadowy society known as the Council, Saya is dispatched to an American military base, where an intense series of swordfights leads her to the deadliest vampire of all. And now after 400 years, Saya’s greatest hunt is about to begin.

Blood: The Last Vampire is an enjoyable film, although it promises more than it delivers in terms of story and action. I haven’t seen the original anime, so I can’t say how it stands up to its source material, but I don’t watch anime, I watch films and as I’ve said it was an enjoyable one.

The story serves mostly as a framework for the action setpieces, and while what’s given of the story hints at something much richer than what we’re given it turns out okay since the action is fun to watch. We follow Saya, an immortal assassin taking out bloodsucking demons to draw out their head honcho Onigen. Her powers-that-be (who, sadly remain as such and no background whatsoever is given as to what this organisation is other than their motive of demon slaying) have discovered quite a lot of activity suggesting demons at the local U.S. Air Force base (did someone say Western appeal!? ..although a lot of these Americans are English, go figure). So off Saya goes undercover to see what’s going on. Cue the rebellious daughter of the general in charge, a character whose presence only serves to kickstart the rest of the film and offers us little more, and some muddiness and off we go into a gauntlet of ferocious demons, sword swinging, cgi blood spray, bat-winged monster chases, impossible acrobatics, and beautiful imagery displayed just before it explodes into violence.

The action and styleishness are both solid, but neither is fresh enough to carry the film anywhere new or heart-pumping exciting. I was totally hooked heading into every brawl, but coming out of it I felt like there could have been something better. Maybe a different angle, a different cut. The choreography was all there, I just didn’t get to see it right. Granted, there was still enough of the visceral element filmed spot on to keep me from losing interest.
Movie Quality: 9/10

The print is presented in 1080p/AVC MPEG-4 with a 2.35:1 aspect ratio. The details are very sharp and clean on this print of the film. This is one of those films that will make you happy being an early adopter of Blu-ray. From the colors to the details, your jaw will drop if you look for some of the superb details. Colors are vibrant providing an excellent looking picture. Flesh tones are natural and accurate looking. Blacks look inky. Details are where this film shines the most with the camera even panning away in many scenes. Not once did I feel like I was at a loss for details making this a very strong presentation.
Video Quality: 9.5/10

The audio is presented in DTS-HD MA lossless 5.1 mix. ince this is a dialogue heavy film, the chatter is coming out of the center at a very nice level. This is a very atmospheric and immersive sounding film. The rears provide quite a few times where sound effects panned across the speakers. There are many scenes that are outside which also take advantage of the soundfield providing some dynamic sound. Dialogue is clean through the center sounding ever so crisp.
Audio Quality: 9.5/10

I was just happy that U.S. filmmakers didn’t massacre the anime’s spirit, that this Americanized version carried enough of the Japanese style and attitude. Albeit the extras being on the thin side, this blu-ray boasts demo worthy audio and video that will make any fan of the film happy to add to their library.
Overall Rating: 8/10