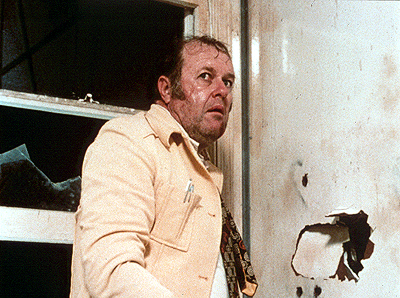 The debut film of director Joel Coen and his brother-producer Ethan Coen, 1983’s Blood Simple is grisly comic noir that marries the feverish toughness of pulp thrillers with the ghoulishness of even pulpier horror. (Imagine the novels of Jim Thompson somehow fused with the comic tabloid Weird Tales, and you get the idea.) The story concerns a Texas bar owner (Dan Hedaya) who hires a seedy private detective (M. Emmett Walsh) to follow his cheating wife (Frances McDormand in her first film appearance), and then kill her and her lover (John Getz). The gumshoe turns the tables on his client, and suddenly a bad situation gets much, much worse, with some violent goings-on that are as elemental as they are shocking. (A scene in which a character who has been buried alive suddenly emerges from his own grave instantly becomes an archetypal nightmare.) Shot by Barry Sonnenfeld before he became an A-list director in Hollywood, Blood Simple established the hyperreal look and feel of the Coens’ productions (undoubtedly inspired a bit by filmmaker Sam Raimi, whose The Evil Dead had just been coedited by Joel). Sections of the film have proved to be an endurance test for art-house movie fans, particularly an extended climax that involves one shock after another but ends with a laugh at the absurdity of criminal ambition. This is definitely one of the triumphs of the 1980s and the American independent film scene in general. 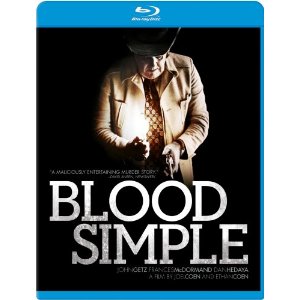 Abby Marty (Frances McDormand) is running away from husband Julian Marty (Dan Hedaya), known simply as “Marty”. She’s hitched a ride with Ray (John Getz), who works for Marty at his bar. When they stop at a hotel the affair starts. Little do they know that Marty has a private investigator on them, Loren Visser (M. Emmett Walsh), taking pictures of their more intimate moments. Ray and Abby return to town instead of running away, but Abby refuses to move back in with Marty.

Marty, in the meantime, has decided to pay the slippery Loren $10,000 to murder Ray and Abby; but Loren figures it’s a better deal to steal Abby’s gun, murder Marty with it, and take the money anyway. Ray finds the body and Abby’s gun and believes that Abby murdered Marty, so he attempts to hide the crime, becoming involved with it also. But Abby is innocent, and doesn’t know what to do when Ray vaguely tries to tell her he’s helped her out.

I wasn’t that impressed with this first Coen Brother’s film. It was rather deadpan, and whether on purpose or by accident it was too hard to tell. There just wasn’t enough ‘Ummph” in the movie for my tastes. There is such a thing as drawing out a scene too long, and that’s what happens several times during the film. It’s slow, and lacking in drama or suspense. There’s a great plot here, it’s just poorly executed.
Movie Quality: 8/10

The print is presented in 1080p/AVC MPEG-4 with a 1:85:1 aspect ratio. Fans of the film will be happy that Fox did a good job with the quality of the print. Provide it that the age of the film and issues of this film on previous releases, Fox cleaned up the film very well. I didn’t see any issues with dirt or specs as in previous releases. Colors are strong, yet softer in several scenes. The strongest part of the print has to do with the clarity and details. Clarity is quite impressive with details being a huge improvement over the DVD release. Black levels are excellent as a part of the atmosphere.
Print Quality: 9/10

The audio is presented in a DTS-HD Master Audio 5.1 mix. This is a film that is very front heavy considering the sound design used in the early 80’s. There wasn’t as much dynamic range as I would have hoped in this film. The score and soundtrack though heavily use the rears to fill the soundfield. Dialogue comes through the center channel very clear and crisp. There was a slight issue where the dialogue didn’t seem like it was well placed in the entire sound design.
Print Quality: 8.5/10

After being told how great the movie was, and after seeing what the Coen Brothers and Frances McDormand did with ‘Fargo’, I found ‘Blood Simple’ to be a disappointing let-down.
Overall Rating: 7/10