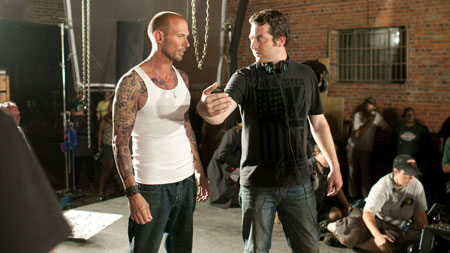 I had no expectations for this film so my review has nothing to do with expecting something decent, but there has been a bit of confusion with customers and ‘Gun’; they both have 50 Cent and Kilmer, they both have the same cover art and they are both really bad.

A standard cop revenge film with some solid urban music, hot ladies doing nasty things and Val Kilmer looking more and more like that great pumpkin. But what surprised me is how incredible the BD quality is – flawless. The night shots, the close-ups, and even the out of focus shots all looked amazingly clear and vibrant. Albeit this was difficult to see at times (did several pause-check stops to test clarity) as the director chose to do the really shaky-cam thing – irritating.

Those looking for 50 Cent will be disappointed as he is in the movie for only a few minutes (but is prominently placed on the cover art). Val Kilmer walks onto the set for one sequence and was horrible. Vinnie Jones has a couple of sequences but he muddled through the lines (although he does get the cheesy car chase scene at the end of the film) – so the film rests on Luke Goss. The cover art is so misleading with Luke Goss being given fourth billing but he is in almost every scene.
Movie Quality: 5/10

The print is presented in 1080p/AVC MPEG-4 with a 1:78:1 aspect ratio. The print looks very good and a bit of a mixed bag with certain scenes. The blacks were fine, but it was way too dark in some scenes. The rest of the film has vibrant colors, is very detailed, and has a pristine print with no apparent issues. The outside scenes look very good and are some of the best in the entire film. There were a few hints of grain in some scenes, but it was so faint, that you had to really look hard to tell.
Print Quality: 8/10

The audio is presented in a DTS-HD MA lossless 5.1 mix. There is great dynamic range with this release. From the start of the film, the entire soundfield immerses you into the action. This is one aggressive mix which booms with some excellent sounding bass. Panning effects are pure bliss to the ears with whizzing effects. Dialogue is rather clear and crisp through the center channel. Both the sound effects and dialogue are equally mixed.
Print Quality: 9/10

I was not expecting a lot being that I thought it as a 50 cent/Kilmer movie, although “Gun” was not as bad as I expected so I had a little more expectations for this one. This was a movie that started off flat and never improved. The acting wasn’t as bad as I expected though. I recommend this as a rental at this point.
Overall Rating: 6/10