Posted in DVD Reviews by George Theofanopoulos on 07 July 2011
A succession of beautiful women mysteriously disappear, shocking the city of Venice, California. 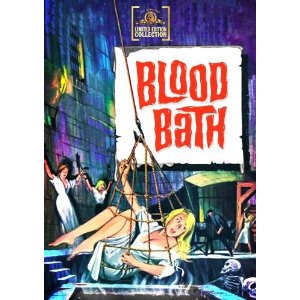 This is a really nice looking copy of the film, and appears to be in the correct aspect ratio, unlike most of the public domain releases. This runs right at an hour long (62 min, I think), and appears to be the Corman final cut of the movie. This is quite a cult movie, since it had a very convoluted history of various edits, including a first reshoot by Jack Hill, and then a later one by Stephanie Rothman. Rothman apparently added the (rather nonsensical) vampire character, and viewers will be perplexed to see the corpse of Patrick Magee show up, since this is his only surviving scene! I rather prefer the longer, choppier, public domain version that has more of the Jack Hill scenes. Nonetheless, this is an attractive, clean copy.

For fans of the film, this is good news that MGM Classics is releasing this titles to DVD.
Overall Rating: 7/10