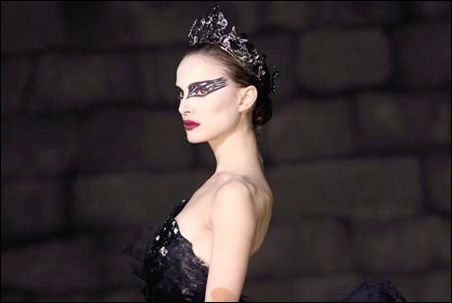 Feverish worlds such as espionage and warfare have nothing on the hothouse realm of ballet, as director Darren Aronofsky makes clear in Black Swan, his over-the-top delve into a particularly fraught production of Swan Lake. At the very moment hard-working ballerina Nina (Natalie Portman) lands the plum role of the White Swan, her company director (Vincent Cassel) informs her that she’ll also play the Black Swan–and while Nina’s precise, almost virginal technique will serve her well in the former role, the latter will require a looser, lustier attack. The strain of reaching within herself for these feelings, along with nattering comments from her mother (Barbara Hershey) and the perceived rivalry from a new dancer (Mila Kunis), are enough to make anybody crack… and tracing out the fault lines of Nina’s breakdown is right in Aronofsky’s wheelhouse. Those cracks are broad indeed, as Nina’s psychological instability is telegraphed with blunt-force emphasis in this neurotic roller-coaster ride. The characters are stick figures–literally, in the case of the dancers, but also as single-note stereotypes in the horror show: witchy bad mommy, sexually intimidating male boss, wacko diva (Winona Ryder, as the prima ballerina Nina is replacing). Yet the film does work up some crazed momentum (and undeniably earned its share of critical raves), and the final sequence is one juicy curtain-dropper. A good part of the reason for this is the superbly all-or-nothing performance by Natalie Portman, who packs an enormous amount of ferocity into her small body. Kudos, too, to Tchaikovsky’s incredibly durable music, which has meshed well with psychological horror at least since being excerpted for the memorably moody opening credits of the 1931 Dracula, another pirouette through the dark side. 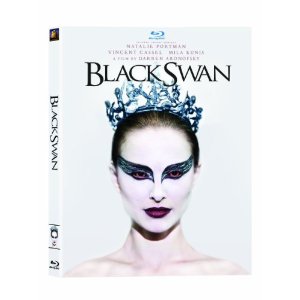 Darren Aronofsky never fails to provoke audiences. From his 1998 film debut, Pi, to his powerful sophomore feature, Requiem for a Dream, it was clear from the start that Aronofsky was a serious filmmaker, willing to take his audiences to places they would rather not go, in order to reveal a specific truth. To this day, his films are extremely cerebral and unflinching. While Black Swan is a change of pace for Aronofsky, it is no less brutal than any of his previous works.

Black Swan is a dark fairy tale and a psychological thriller, as well as a cautionary tale about the pursuit of artistic perfection. Natalie Portman steals the show as Nina Sairs, a young, ambitious dancer at a prestigious academy, who has just been chosen for the dual role of the White and Black Swan in Tchaikovsky’s Swan Lake. While Nina’s virginal innocence lends itself to the role of the White Swan, her instructor, the womanizing Leroy, insists that she will have to “lose herself” in order to accurately represent the openly sensual nature of the Black Swan. Suddenly, Nina begins to face corruption at every turn, coupled with what can only be described as a mental unraveling. The line between dreams and reality becomes horrifyingly blurred, as Nina tries to “find” her Black Swan.

From the very start of the film, you feel for Nina Sairs. Natalie Portman’s portrayal is a perfect balance of naïveté and blossoming sexuality. Her transformation is heartbreaking and powerful, and by the time the credits roll, you will be speechless. This is Portman’s best performance to date, for which she won an Oscar this year.

Black Swan is a film that will swallow you whole; unfortunately, Aronofsky has included two indulgent, unnecessarily graphic sexual scenes in this otherwise flawless film. Granted, sexuality is a major theme in this film and serves the story in its own right, but there is something to be said for subtlety. The two scenes in question seem as though they were added for mere shock value alone, and in these instances, art becomes exploitation. With that being said, while I believe that Black Swan is one of the best films of the year, I must recommend it with caution. If you are easily offended, you may want to look elsewhere.
Movie Quality: 9/10

The print is presented in 1080p/AVC MPEG-4 with a 1:85:1 aspect ratio. The print looks very good throughout without any apparent issues. Colors are vibrant and carry pop which brings out the fine details. The detailed scenes stand out very well. Blacks are deep. I found the print to be just perfect looking for the material as there is quite a bit of grain throughout the print. That grain helps add to the grittiness and dark nature of the film. This results in also a softer looking image.
Print Quality: 9.5/10

The audio is presented in a DTS-HD MA lossless 5.1 mix. This is an intense and complex audio experience you will not be disappointed. I always felt like there was something going on in the soundfield. There are special effects from dream sequences and the soundtrack peer through the rears providing some panning effects. It is done so well that you feel as a part of the experience. Dialogue is clear and crisp through the center channel with no apparent issues.
Print Quality: 9.5/10

Anyway, this is the kind of movie that stays with you, long after the ending credits. I would compare it to another movie with a similar premise, “The Machinist”, starring Christian Bale (another brilliant performance, and you need to see it, if you haven’t already). You will be trying to figure out what really happened for days. And you definitely will want to watch it again. I wanted to watch it again as soon as it was over! It’s that good.
Overall Rating: 9/10