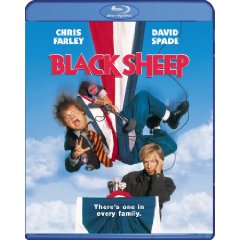 Chris Farley plays the disaster-prone brother of a gubernatorial candidate in Washington State. Though he is well meaning, the havoc he creates on the campaign trail is drawing press attention, so a snotty aide (David Spade) to the politician is dispatched to keep the big lug under control. Spade’s character initially insults his charge as often as possible, but over time, the two bond and end up becoming a part of the final election push. Farley and Spade have some very funny moments, but overall the film feels rushed and poorly planned. Constant changes in character and script happen recklessly and randomly so that nothing ever really makes sense; the film keeps changing the rules by which it plays.

With the big success of Tommy Boy, people thought they needed another quick hit with both Farley and Spade. Instead, casting Farley and Spade in this bomb does nothing but give the audience hopes, even PLEAS for the slightest bit of comic relief. The film has a couple laughable moments, but some may be laughing more at how rushed and undeveloped the film is than at some corny joke about “chocolate pudding in my underpants.”  And if you ask me, it’s the rushing of the film that is its biggest demise. Characters constantly go out of character for no reason, there aren’t very many pleasing jokes, and nothing ever does a very good job of getting developed.

I got the impression that the film’s basic plot was to send Farley and Spade’s characters up in a cabin so that Farley’s character wouldn’t ruin the election for his brother. However, I don’t think the two even spend a half hour in the retreat. Also, Farley is much funnier when his character isn’t trying to be a nice-guy, role-model type. I love Chris Farley and was very sad to see him go, but for some of his better moments, get Tommy Boy, or SNL’s ‘Best Of Chris Farley.’ It’s hilarious, nostalgic, and much more fun to watch than this.
Movie Content: 7/10

The print is presented in 1080p /AVC MPEG-4 encode with a 1.78:1 aspect ratio. I was rather surprised by the quality of the image for ‘Black Sheep’ considering that ‘Tommy Boy’ was lacking in a few areas. Colors hold up very well through out the entire presentation with outdoor scenes being the best looking. Grain is present, and is very light never becoming a distraction. Fleshtones are natural and realistic. Blacks are deep, but never strong. Details are average where up close scenes looked good. Anytime the camera panned away, I found the image to lose considerable details. Considering how this film wasn’t the greatest of Chris Farley’s, the image quality was great.
Print Quality: 8.5/10

The audio is presented in Dolby TrueHD 5.1 mix. ‘Black Sheep’ is a comedy that is primarily dialogue driven with the soundtrack and a few special effects in the soundfield. The rears get a fairly good work out from the soundtrack. I was quite surprised that this catalog title sounded so well. There are times where the rears are silent when you would expect some kind of audio, but that is not the case. That is my only drawback of this mix. Dialogue is well placed into the center channel with excellent clarity.
Audio Quality: 8/10

‘Black Sheep’ is my least favorite Chris Farley film. It felt many times that both Farley and David Spade were going through the motions in this film. The picture quality was unexpectedly impressive and the audio was good except for a few issues where the rears felt silent at the wrong times. Fans of the film will be happy for this release, except the issue that there are no special features.
Overall Rating: 7.5/10