Posted in DVD Reviews by George Theofanopoulos on 22 December 2010 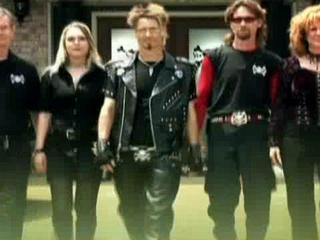 Season 2 of BILLY THE EXTERMINATOR reunites viewers with the one and only Billy Bretherton as he tackles some of Louisiana’s creepiest, craziest pest problems.

In the pest management industry for 16 years, Billy runs Vexcon the only pest removal team in the state that handles all types of animal removal with support from his wacky but lovable family: kid brother, Ricky; tough-as-nails father, Bill Sr.; sassy office manager and mom Donnie; and beloved wife, Mary. And pest removal is big business in the swamp-like state of Louisiana. This season Billy and his team attempt to capture a beaver wreaking havoc at a summer camp, search for a rattlesnake slithering around a funeral home, go head-to-head with an angry raccoon trapped in a dumpster, tangle with some ornery water moccasins and wasps, match wits with an alligator in a family pond, and confront the largest roach infestation of their careers. A former U.S. Air Force Sergeant, Billy has taken a militaristic approach to pest control and is emerging a winner. 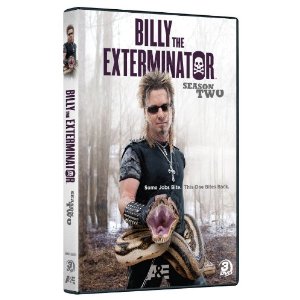 The show is highly entertaining, it is great for kids and adults alike, Billy takes his approach to exterminating different then most companies, Billy relocates the larger captured animals instead of killing them and his natural methods of pest control is safe for both humans and pets. It is obvious he loves his job and takes it very seriously despite his rock star look and appeal, he is very gentle and kind. Billy gives the appearance of an out of control individual, always dressed in black with sunglasses and black cowboy hats, his t-shirts are as black as the pick-up truck he drives and he is covered with skull and crossbones which is also the whole theme of the Vexcon family, no matter how cool he looks and dresses with his great looks, he is obviously bright and very articulate, a very well likable guy with a great personality and professionalism.

While watching Billy and the crew work with the wilder animals and pesty pests, the show also focuses on the other members of the family, Ricky has tense goings on between his ex and the family, and sometimes creates arguments among them. Donnie the mother, is very outspoken and is definitely the queen of the Vexcon co. Her ways sometimes cause some heated moments on the show. Despite it all they seem to be a very close, and loving family all with great hearts. This show offers very informative information along with some very interesting outcomes.

In all, the program is actually great fun for the whole family and very kid friendly. It doesn’t have a single violent thing about it. He rescues the unwanted pests and animals, usually getting relocated to more  appropriate habitats, and the people that call on Billy’s service can rest assure they will be cured of their pesky problems.
Overall Rating: 8/10