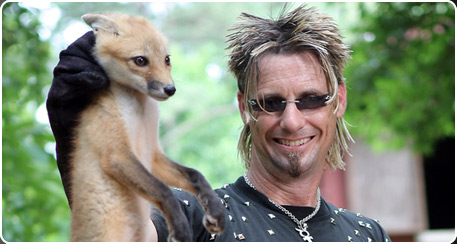 Return to the wilds of Louisiana for Season 3 of BILLY THE EXTERMINATOR as wild man Billy Bretherton goes head-to-head with creepy, crawly critters of all shapes and sizes. In the pest management industry for over 16 years, Billy runs Vexcon the only pest removal team in the state that handles all types of animal removal with support from his wacky but loveable family: kid brother, Ricky; tough-as-nails father, Bill Sr.; sassy office manager and mom Donnie; and beloved wife, Mary. This season Billy and his crew battle feral hogs, match wits with a raccoon terrorizing a local business, get between a family of alligators and an army of fire ants, track down a venomous snake, and tackle a duck blind filled with gators, spiders and snakes. A former U.S. Air Force Sergeant, Billy has taken a militaristic approach to pest control and is emerging a winner. 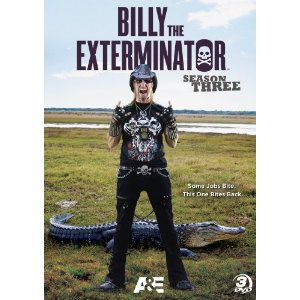 The show follows the professional life of Billy Bretherton, an expert in the field of pest control who is the proprietor of Vexcon Animal and Pest Control in Benton, Louisiana which serves the Shreveport-Bossier metropolitan area. Bretherton, a former Sergeant in the United States Air Force, had previously been featured on the Discovery Channel’s Dirty Jobs series on the season 1 episode “Vexcon”, and the season 2 episode “Termite Controller”. Both previously and in his current show, Bretherton is known for his unusual fashion style, consisting mostly of black garments (many of them leather) with large silver jewelry and steel studs and spikes in different configurations.

Many members of Bretherton’s family, such as his parents, “Big” Bill and Donnie, and his brother, Ricky, as well as other employees, make frequent appearances. Donnie Bretherton normally acts as Vexcon’s dispatcher and rarely goes out on jobs. Ricky’s ex-wife, Pam, and Billy’s wife, Mary, each resigned during the production of the first season.

As noted in many episodes, Billy Bretherton prefers, if at all possible, to relocate captured animals and is a proponent of natural methods of control. He frequently gives a description of the pests, their preferred environment, and any diseases (usually using their Latin names) associated with them. Ricky Bretherton acquired an allergy to bee and wasp stings due to being stung so many times.

Billy Bretherton entered the Air Force at age nineteen intent on a career in law enforcement. However, his military entrance examination indicated that he had an aptitude for biology; he was sent to study both that subject and entomology. His extermination career began in earnest while stationed at Nellis Air Force Base in North Las Vegas, Nevada.
Movie Quality: 9/10

When I saw my first episode of “Billy the Exterminator,” I was instantly hooked! Just how cool is it to watch someone tackle pests like giant yellow jacket nests, bobcats, and hoards of bats up in someone’s attic? At first these type situations were the draw, then I starting noticing something as the episodes progressed.
Overall Rating: 6/8