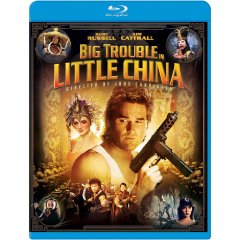 Once you settle into the realization that this 1986 John Carpenter (Halloween) film is not going to be one of the director’s more masterful works, Big Trouble in Little China just becomes a full-tilt comic blast. Kurt Russell is hilarious as a drawling, would-be John Wayne hero who steps into the middle of a supernatural war in the heart of Chinatown. While kung fu warriors and otherworldly spirits battle over the fate of two women (Kim Cattrall and Suzee Pai), Russell’s swaggering idiot manages to knock himself out or underestimate the forces he’s dealing with. The whole thing is dopey, but it’s supposed to be dopey and Russell’s game performance brings an ironic edge. Carpenter directs some nifty spook effects (the sudden arrival of three martial arts demigods from out of nowhere is worth applause), and he also wrote the music.

Big Trouble in Little China fits the definition of a cult film. Not popular on its initial release – being blocked by other summer films of 1986 such as ALIENS. This film was intentionally made a B-movie and the cast obviously had a lot of fun making it, with lots of tongue in cheek dialogue and intentional mistakes. It all adds to the campy fun that is Big Trouble in little China Town. The best part about it comes from the chemistry between Jack Burton and Wang Chi. You’d think Russell’s character would be on top of things being the muscled American toting the gun, but Chi is the real hero with all his martial arts and fighting skills, but Burton never seems to get that constantly puffing his chest believing he is in fact the hero and Chi is the sidekick. This is the main humor that comes from this film, and I found that aspect incredibly creative considering it was a very unique idea that many people didn’t get at the time but I believe the idea has begun to catch on and people can now appreciate that humor aspect of Big Trouble in Little China.

This is easily one of John Carpenter’s most out there films, an extraordinary achievement given that Carpenter is the man who gave us ‘Halloween’, ‘The Thing’, `Christine’, `Prince of Darkness’ and `They Live’ to name a few of his greatest films. It’s a film that knows it is not to be taken seriously and is not about to let you stop from enjoying it. It’s tremendous fun, top form Carpenter from the good old days when he made great movies, beautifully paced and executed, with not a single dull moment and just the right balance of action, excitement and wry humour.
Movie Quality: 9.5/10

The print is presented in 1080p/AVC MPEG-4 with a 2.35:1 aspect ratio. I will say the word amazing for how good the film looks in its debut in high definition for a catalog title that was made to be a b-movie. Yet again FOX engineers deliver the goods in the picture department. The previous DVD Special Edition was an upgrade from the original VHS release and the trend continues here with strong colors, yet a darker color palette was being used. Details are good considering that this is a 23 year old film. Blacks are deep. I found the transfer to be rather clean with very small hints of grain in a few scenes that you would have to really look hard to notice. I can finally retire the DVD version.
Video Quality: 9/10

The audio is presented in DTS-HD MA lossless 5.1 mix. While the audio was never something to brag about with the DVD version, it is actually much better here with a high definition audio mix. This is a front heavy experience all around, but the rears do a great job of bringing out sounds and effects from the score. I found the audio to be rather clean with light dynamic sounds coming through the rear surrounds. Dialogue comes through the center channel very clear and crisp.
Audio Quality: 9/10

John Carpenter has been hit or miss the last few years never hitting the success of his 70’s and 80’s film releases. While ‘Big Trouble in Little China’ is a zany film, it is a very enjoyable film once you leave your brain at the door. On Blu-ray this is a definite upgrade over DVD and highly recommended for fans.
Overall Rating: 8.5/10