Martin Lawrence returns as Master of Disguise–well, just one disguise, honestly, but he’s really, really good at it–FBI agent Malcolm Turner in the second sequel to 2000’s blockbuster Big Momma’s House. Here, the agent must throw on the padding to pose as the housemother at an exclusive Female School of the Arts, in an attempt to ferret out a murderous Russian Mobster. The twist? This time he’s forced to bring his stepson (Tropic Thunder’s Brandon T. Jackson) along with him. The presence of Jackson makes this genially mellow sequel feel like a low-impact passing of the torch, with Lawrence (who also executive produced) seemingly content to let his younger costar handle most of the cross-dressing comedic heavy lifting (ballet lessons, slumber parties, etc.). Only a scene where Big Momma faces off in a game of Twister against an equally gargantuan security guard (an uncredited and very funny Faizon Love) really feels of a piece with the earlier films. Stranger still is the inclusion of a half-dozen musical numbers, including one in a lunchroom that blossoms into full-out High School Musical territory. Awkward as these song-and-dance interludes often are, the filmmakers should deserve some credit for attempting to inject some form of new energy into a scenario that could definitely use a boost. Longtime fans of the franchise and Lawrence, however, may wonder if someone at Fox accidentally let Glee into the telepod. 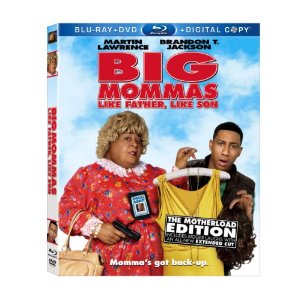 I thought it was very funny and just an enjoyable movie. I actually like this one better than Big Momma’s House 2. Martin Lawrence and Brandon T. Jackson have great chemistry both on-screen and off-screen,they are both comedians so the jokes were on point.(my opinion). Brandon T. Jackson replaced Jascha Washington after he declined to reprise the role of Trent, which in this movie, due to the plot and his character having a leading role, he probably wasn’t the best fit for the “new” Trent anyway as the storyline makes it out to be.(my opinion)

The plot: FBI agent Malcolm Turner(Martin Lawrence) and his 17-year old stepson Trent (Brandon T. Jackson) go undercover at an all-girls performing arts school after Trent witnesses a murder. Posing as Big Momma and Charmaine, they must find the murderer before he finds them.

The movie also stars Jessica Lucas (Haley), Portia Doubleday (Jasmine), and Faizon Love (Kurtis Kool). If you are a true Big Momma fan, you’ll love this one!—–or maybe not, depending what YOU like.. Just give it a chance for once, I highly recommend viewing this film if you love comedy!

The print is presented in 1080p/AVC MPEG-4 with a 2:40:1 aspect ratio. Colors are deep and well saturated throughout the entire presentation. Blacks are strong and almost inky at times. Nowhere did the image ever appear soft with such strong colors and black levels. Flesh tones were also natural. The film carries a very clean look throughout which some might enjoy, while others might not be too happy with.
Print Quality: 9/10

The audio is presented in a DTS-HD MA lossless 5.1 mix. This film is a dialogue driven film with the occasional soundtrack mix peering into the soundfield. Dialogue was clean through the center channel with a nice degree of depth. I never had to raise or lower the volume to make out what was being said. The soundfield does get a few effects into play, but nothing major. The soundtrack takes advantage of the soundfield with audio also lightly pouring through the rears. I found this to be more of a front heavy experience due to the type of film.
Print Quality: 9/10

This is obviously not an Oscar worthy movie, but, if what you are looking for is a good time, a few laughs at hidden identity and some physical comedy, this is a good choice.
Overall Rating: 7/10