Posted in DVD Reviews by George Theofanopoulos on 24 January 2011 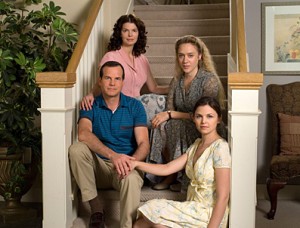 For years, Bill Henrickson wished for a world free from the corrupt “prophet” of Juniper Creek, Roman Grant. Now that Roman appears to be out of the picture, Bill and his family can breathe easy … or can they? Hold tight for the fourth season of the iconic, Emmy®- and Golden Globe®-nominated Big Love. 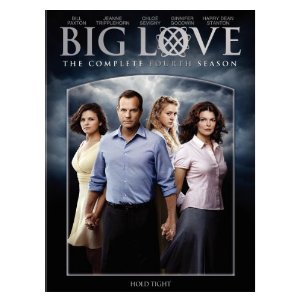 Big Love is an off-beat family drama that mixes ‘modern’ mormon-polygamist culture with mild watered-down western motiffs and sociopolitical themes. The show has always been surprisingly wholesome despite the taboo lifestyle of almost all the characters in the show. Its core concepts have consistantly been about family, spirituality/relgion, faith and duh.. love, making it a profoundly philisophical and emotionally resonant story.

Season 4 takes the show, to what I can only refer to as biblical proportions. The writers did inject Big Love with a heavy dose of crazy-sauce, but it’s brilliantly executed as all things produced by Tom Hanks are. The acting and directing are always top-notch, and they leave nothing to be desired. As over-the-top as things get, every plot-development is a natural and entirely possible progression.

Every character is pushed to their limits, and I can’t say enough about the massive amount of character-growth throughout just 9 episodes. The entire cast performs their very best, even when their character is at their very worst. Aside from Hank, everyone shined. Their personal story-lines challenged the actors, the writers and the audience, I was thoroughly impressed.

Bill’s role as the main protagonist in particular is pressed, stretched and turned inside-out as he risks and sometimes flat-out sacrifices all that he, his family and his friends have been working for from the very beginning, in a race to become a state senator. On a path he believes God has chosen for him, he becomes somewhat out of control. He pulls out all of his tricks to get what he wants, and also in the process, betrays and/or loses the trust of almost everyone around him.

Bill thought with Roman Grant gone, he was free to dream big, but with bigger dreams come bigger risks, bigger consequences and bigger enemies. The entire Hendrickson family struggles to keep up with Bill’s ambitions, and by the end of the season, their lives are changed irreparably. Things really do get a bit crazy by the end, but it’s all jaw-dropping great television.

There are plenty of twists you won’t see coming, and you won’t regret buying this DVD set.  The series come to a conclusion with Season 5 this winter, so run to the store to get caught up.
Overall Rating: 8/10