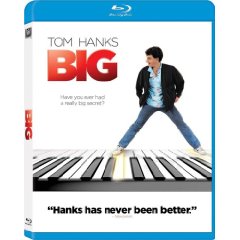 A perfect marriage of novel but incisive writing, acting, and direction, Big is the story of a 12-year-old boy who wishes he were older, and wakes up one morning as a 30-year-old man (Tom Hanks). The script by Gary Ross (Dave) and Anne Spielberg finds some unexpected ways of attacking obvious issues of sex, work, and childhood friendships, and in all of these things the accent is on classy humor and great sensitivity. Hanks is remarkable in the lead, at times hilarious (reacting to caviar just as a 12-year-old would) and at others deeply tender. Penny Marshall became a first-rate filmmaker with this 1988 work.

‘Big’ is about a 13 year old boy named Josh Baskin who changed to 30 over night. After being humiliated at a carnival by the fact that his crush is allowed onto a roller coaster and he’s still to little he decides to go to a wishing game where he wish’s that he was big. In the morning Josh wake’s up as a 30 year old man, terrified his mother make’s him leave the house. With no where to go he rents an apartment in New York and gets a job at FAO Schwartz toy company where he quickly progress’s up the ladder in the company. After being 30 for a while he begins to have feeling for his co-worker Susan Lawrence. He’s then face with a huge decision to change back into a 13 year old boy or to stay as a 30 year old man. Susan persuades him to live out his childhood. So Josh and his best friend Billy Kopecki went to find another wishing machine to wish Josh little again. Once he returns to school there is a new girl who look’s exactly like Susan but younger.

‘Big’ is filled with comedy and made me laugh. I think it was one of the best movie’s Tom Hanks played in.I enjoyed watching this movie. It deals with the many problems that adults and kids face. It teaches kids that growing up aren’t all fun and games and that they have more responsibilities as an adult. I would recommend this movie to anyone who enjoys a good comedy. Seeing how a kid takes on adult responsibilities is comical. One of my favorite scenes is when McMillan and Josh play on the giant piano. The actor’s play the roles very well as you forget how absurd it is for a kid to wake up as an adult. I highly recommend this movie.
Movie Content: 9.5/10

The print is presented in 1080p/AVC MPEG-4 with a 1.85:1 aspect ratio. For a film that is pre-high definition era, the print is pretty good, but it is uneven throughout on Blu-ray. There are a few scenes where the picture looks clean and pristine with tiny hints of grain to times where there is much more grain to the print. The fleshtones while having a natural look to them also have a muddy look to them. The image is rather soft at some points of the film, but this is the best that this film has ever looked when compared to DVD.
Print Quality: 8/10

The audio is presented in DTS-HD MA lossless 5.1 mix. This is not an audio mix that you will go in expecting huge things from the soundfield as it is primarily a dialogue driven film. The dialogue is clean and clear through the center channel with no apparent issues. I was rather happy with the way the film sounded considering that this was more of a dialogue centric film.
Audio Quality: 8/10

‘Big’ is one of the most creative films I have seen come out of the 80’s and has an added in subtle comedy to it. I highly recommend this film on Blu-ray. While it might be a hard sell for those that already own this on DVD, it might be worth your time to check out.
Overall Rating: 8/10