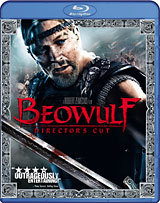 I have never read the ‘Beowulf’ tale, but the way that Robert Zemeckis presented it to us in this full feature presentation makes this an even larger epic tale than I expected. ‘Beowulf’ is a fully animated adaptation and boy does this deliver.

The story in the movie revolves around Grendel, the beast that arrives to King Hrothgar’s kingdom to cause chaos. King Hroghgar offers a handsome sum of gold to anyone that can slay Grendel, enter Beowulf whom is the one that comes to the rescue. To make matters worse, Grendel has a mother, which is a demon herself, she is a temptress and very seductive that has caused problems for King Hrothgar and our future king. Here come many lies, deception, and revenge in the story of Beowulf. Beowulf goes from a very strong warrior to a mere man that is eaten up by his past mistakes in the second half of the movie. The final battle with the fire dragon is just plain wonderful and how everything comes together.

While no movie is without its flaws and they are in here too. While some of the animation could have been better in some areas, such as the mouth movement. It just didn’t look quiet right in some areas. I didn’t care for the goofy unclothing of Beowulf going to fight Grendel, but just didn’t seem right. Other than that, the picture quality is just outstanding and Beowulf has to be one of the best Blu-ray discs that I have seen yet. This is demo material and even rivals Cars, Shrek 3, and Ratatouille on High Definition DVD. It goes to show what can be done with Blu-ray PQ. Beowulf is presented with a lossless Dolby TrueHD 5.1 surround sound mix and boy does this audio make you feel like you are in an earthquake. Everything is just crystal clear and surprises me as to why Paramount hadn’t done the same with many of their other action titles released previously on Blu-ray.

Paramount ports over all the HD DVD and DVD bonus content to this Blu-ray verison. Now why can’t other studios give the same offering instead of always thinking about the double or triple dip down the road. Some might love this movie, while other may decide it’s not for them. From the fantastic retelling of ‘Beowulf & Grendel’ to the top notch video and audio presentation, Beowulf is a technical demo you want to show off to your friends.