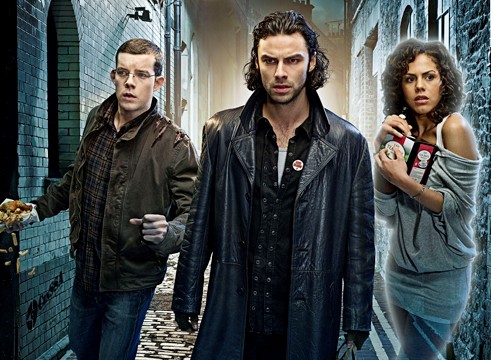 Hot on the heels of the SyFy Channel’s American remake, the original UK Being Human returns to DVD and Blu-ray for a third gripping season. Leaving the memories of their much-loved former house behind, George, Nina, and Mitchell settle into their new home – a kitschy B&B named Honolulu Heights that boasts many benefits for supernatural types…a large basement providing safe haven on a full moon, for starters. Season three boasts an impressive array of guest-stars, including Lacey Turner (EastEnders) as Lia, who Mitchell meets in Purgatory, Robson Green (Wire In The Blood) as primitive werewolf McNair, Michael Socha (This Is England ’86) as McNair’s son Tom, Paul Kaye (It’s All Gone Pete Tong) as twisted vampire Vincent, Craig Roberts (Young Dracula) as teenage vampire Adam; Nicola Walker (MI-5) as social worker Wendy, James Fleet (The Vicar of Dibley) as George’s father; and Jason Watkins making an eventful return as vampire leader Herrick. 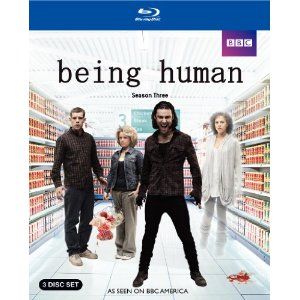 Though I suspect the theme has always been there, only with Season 3 have I realized that this is an essentially religious narrative. But it’s a religion in which God plays little. Unlike prior seasons, this one has little mention of organized religion or church, and when George stands over a dying man, he can’t even remember the words to the Shema. Instead, this religion pits the communion of the house against the greedy individualism of the larger world.

This bleak vision of Wales, all shabby brick and abandoned industrial iron, creates a look of despair and desolation. Which probably explains why they have the Hawaii mural in their house: they’ve build a paradise within their own walls. In a significant deleted scene from episode 2, Annie calls Mitchell her “saviour.” These characters’ ad hoc religion lets them resist a bleak and godless world through the sacrament of just remaining together.

Notably, when Mitchell crosses into the afterlife to retrieve Annie, he describes the place he finds as “Purgatory.” The place of purging, where sins are expunged by recognition and contrition. This religion doesn’t have much need for Heaven or Hell, God or Satan, but it prizes guilt and culpability. The only hope against encroaching struggle and despair comes in unity and society. Notice how militantly individualistic the other vampires and werewolves are.

This makes their house a monastery. The characters eat together, find love within their own walls, and “pray” as a group by standing together against their damaged natures. But without a shared theology, they have to face their sins directly. Without Jesus to save or Buddha to guide, their religion makes them remember their sins over and over again. They persevere, not to save their own souls, but because they can only be saved together.

This season’s deep immersion in death and the afterlife is much darker than previous seasons. As our heroes aid zombies while fighting wolves and vampires, they stand together against the world, becoming stronger only as a group. Though they have an evangelism program, inasmuch as they reach out to McNair and the resurrected Herrick, sin constantly comes from outside.
Movie Quality: 9/10

“Being Human Season Three” just shows that even vampires and werewolves can’t run away from their problems — and when their problems catch up, things get messy.
Overall Rating: 8/10