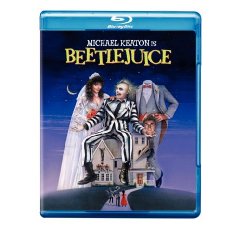 The story of ‘Beetlejuice’ is a rather interesting one, and very enjoyable from start to finish. Adam (Alec Baldwin) and Barbara (Geena Davis) are in the process of enjoying life in their over sized home. Yet they continue to get pestered to sell their home because it is perceived as being too big for them. Adam tells Barbara that he needs to go to the hardware store, so she takes a car ride with him and as they go over a wooden bridge, the car crashes into this bridge as the car falls into the water underneath drowning the couple. The thing that they don’t realize is that they have died, yet their souls continue to wander in their home living out their day to day activities.

While death is their worst fate, there is something worse that sends Adam and Barbara into a whirlwind. Once they find out that they are dead, they also find out that their house was sold. Selling off their home was one of the thoughts they always fought off and now their nightmare has come true even when they are dead. The new family starts moving in and this family is so over the top that they are the kind of people that Adam and Barbara despise. The family is right from New York, with the mother Delia Deetz (Catherine O’Hara), her husband Charles (Jeffrey Jones), and step daughter Lydia (Winona Ryder) are in for some fun with more than they bargained for with this purchase.

I have enjoyed ‘Beetlejuice’ over the years and things only get better with the films release on Blu-ray. The original DVD version was released in 1998, for its 20th anniversary the film has been re-released for DVD and for the first time on Blu-ray.

Picture/Audio Quality
The print is presented in a 1080p/VC-1 encode with a 1.85:1 aspect ratio. This is the best that ‘Beetlejuice’ has looked yet, while the print still has grain throughout, it isn’t as apparent as it once was on the DVD. I found some scenes to be a bit washed out looking, while the colors have a decent pop.

The audio is presented in an English Dolby TrueHD 5.1 mix. For a film that is 20 years old the audio stacks up rather well to some of today’s releases. While the surrounds aren’t working at all times, the score from Danny Elfman sound incredible throughout the film. Dialogue came through the center channel quiet clear without any issues at all. The TrueHD track though does breathe new life into the audio that wasn’t as impressive on the regular edition DVD.

If you are a fan of ‘Beetlejuice’ and Tim Burton’s work, I highly recommend picking up the 20th Anniversary Deluxe Edition on Blu-ray. While it might be slim on special features, the improved video and audio really help add some new life to an already fun little movie from the late 80’s.