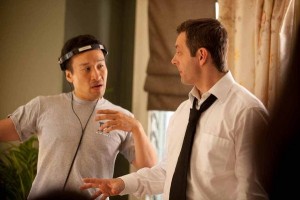 Bill (Michael Sheen) and Kate (Maria Bello) hopelessly try to find some hint of an explanation after finding out that their only son committed a mass shooting at his university before taking his own life. They struggle numbly through the funeral, the media onslaught, and the awkward pity from relatives and friends. Their already strained marriage is tested as they realize all they have left with each other is their shared grief and confusion–and the unfortunate legacy of their son. This life-altering event forces Bill and Kate to face their feelings of guilt, rage, blame, self-discovery –and ultimately hope–so that they can finally see each other and their chance for happiness again with clear eyes. 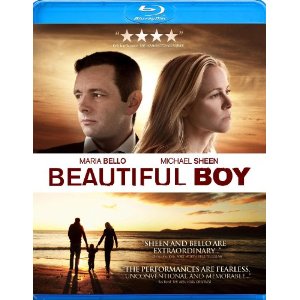 Sam Carroll (Kyle Gallner) calls his parents from college. His father Bill (Michael Sheen) doesn’t speak to him for very long; his mother Kate (Maria Bello) speaks to him longer but neither really says anything of particular importance. What they don’t see is that Sam is on the verge of tears. The next day, Sam is dead of a self-inflicted gunshot wound after perpetrating a shooting spree at his school.

Bill (Michael Sheen) and Kate (Maria Bello) are living a stalemate of a marriage on the brink of ending: Kate is a proofreader for writers (currently for Cooper played with great sincerity by Austin Nichols) while Bill immerses himself in his business life. They now have separate bedrooms, their only tie is their son Sammy (Kyle Gallner) who is off to his first year of college. Bill and Kate learn that there has been a shooting incident at Sammy’s college and that a number of students were killed. When police arrive at their home they receive the news that Sammy is among the dead but worse than that, Sammy is the one who killed all the students and faculty and they committed suicide. Bill and Kate are devastated, become the source of the paparazzi and move in with Kate’s bother Eric (Alan Tudyk) and sister-in-law Trish (Moon Bloodgood) and their young son.

The tension continues to build and when Kate attempts to hide her grief by caring for the brother’s house and family, Bill and Kate move to a motel run by a compassionate clerk (Meat Loaf Aday). Events happen and Bill and Kate flirt with restoring their marriage only to separate: the manner in which they find their way back toward sanity by confronting their own demons is the quiet way in which this story ends. Instead of a predictable happy ending the audience is left in the throes of the mending process – a writer/director choice that makes the film far more dramatic than most.
Movie Quality: 9.5/10

The print is presented in 1080p/AVC MPEG-4 with a 1:78:1 aspect ratio. Colors are dull and drabby looking throughout the entire presentation. Blacks are strong and almost inky at times. The image did appear soft due to the colors not being strong or providing a varied color palette. Flesh tones were also natural. The film carries a very clean look throughout which makes the excellent details stick out.
Print Quality: 8.5/10

The audio is presented in a Dolby TrueHD l0ssless 5.1 mix. Dialogue for the most part is handled very well, except for a few scenes where I felt it was a tad softer. The rears do not get much action here, but the front heavy portion of the film does handle the dialogue very well. The sound stage does a nice job at whatever is thrown at it.
Print Quality: 8/10

Sometimes the parents had no clue – no signs – possibly because they were blinded by love, or they were preoccupied by so many other things in their and their families lives. Watch this riveting film to see what I mean. It’s a stunning piece of work, regardless of what some critics have said. A revelation!
Overall Rating: 7.5/10