Batman: The Brave and the Bold Season Two Part One DVD Review

Posted in DVD Reviews by George Theofanopoulos on 16 August 2011 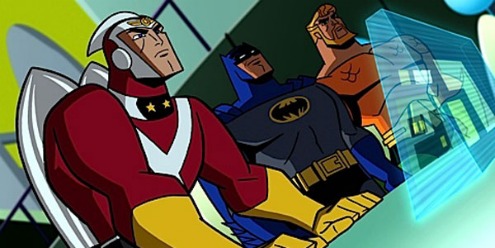 This second set in the Cartoon Network’s reboot of an animated Batman series continues the fun of part one in brilliant colors, dazzling if low-tech animated resolution, and dry-witted, square-jawed, super-fun superhero action. The series’ conceit is to team up the Dark Knight (not so dark in this incarnation) with another marquee crime fighter from the DC Comics stable. Aquaman, Green Arrow, Jonah Hex, Black Canary, Blue Beetle, Red Tornado, and a slew of other notable or obscure figures make guest appearances in each episode to help Batman outwit and/or out-brawn a supervillain who also may or may not be well known to Batman aficionados. The tone is light and filled with humor and wisecracking between the rock ’em, sock ’em action sequences, with banter that may appeal as much to the older fanboy set as the young Saturday morning kiddie market. Each 22-or-so-minute episode (13 in all) keeps to its own character and story arc and moves briskly along with fast pacing and snappy banter. Highlights include a team-up between Batman and Sherlock Holmes, and an encounter between Batman and Bat-Mite (voiced by Paul “Pee Wee Herman” Reubens) that is perhaps the most bizarre adventure of the bunch. But the standout is “Mayhem of the Music Meister,” an all-musical episode with the Music Meister played by none other than Neil Patrick Harris. Fans of Joss Whedon’s Dr. Horrible’s Sing-Along Blog know about Harris’s penchant for wacky side projects and his made-for-Broadway-show-tunes voice. They will particularly enjoy the thoughtful wit and playful sensibility that infuses this and most other installations of a popular Cartoon Network offering that deserves a good healthy run as a standout from most of the dreck that is 21st-century TV animation. 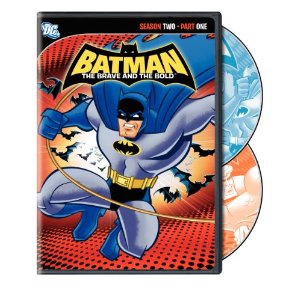 BATMAN: BRAVE AND THE BOLD takes a break from portraying the Dark Knight as a Gloomy Gus. But, no worries, those who miss the more morose version will be happy to note that this sucker’s slated for cancellation after three seasons, with a new animated – and darker – Batman series waiting in the wings to restore order. Meanwhile, why not enjoy the ride? This is a really cool show. The hook, of course, is that Batman in each episode teams up with a different superhero. Makes it kinda hard to maintain that brooding loner vigilante rep.

The tone of the stories takes a cue from the breezy jazzy score and from the look of this Batman, his design decidedly inspired from how he was drawn back in the Silver Age, an era in which Batman stories leaned towards the lighthearted. This Batman is pretty chill. He doesn’t mind engaging in banter. He even indulges in unashamed alliteration. Where else can you hear Batman throw out over-the-top lines like: “The Hammer of Justice is unisex!” or “Good work, guys. Justice wins the day, thanks to the Brave and the Bold.” The Tick should take notes.

I still got love for Kevin Conroy, but Diedrich Bader is fantastic as the voice of Batman. He’s got that good timbre. Granted, I was momentarily out of sorts because, for a while, every time Batman spoke I kept thinking of that borderline creepy (and yet hilarious) character Bader plays in OUTSOURCED.

The episodes are uniformly stand-alone, each kicking off with a teaser segment which often has nothing to do with the main storyline. Two exceptions are “The Color of Revenge!” and “Mayhem of the Music Meister!” What sets this Batman series apart from the other ones in the past is that the premise opens it up to the entire DC universe, instead of being confined only to the Batman mythos. The recent THE BATMAN, in its fifth and final season, got to play in a bigger sandbox. But BRAVE AND THE BOLD has the run of the entire  park (if you get the analogy).
Movie Quality: 9/10

BATMAN: THE BRAVE AND THE BOLD – Season One, Part Two is a two-disc set which collects the remaining thirteen episodes of Season One. There are no bonus features, which is not a good thing.
Overall Rating: 9/10