Posted in DVD Reviews by George Theofanopoulos on 24 March 2011 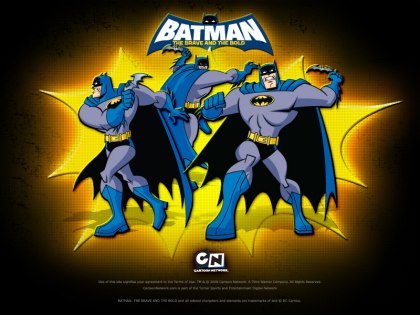 From the streets of Gotham City to the farthest reaches of the Galaxy, Batman continues to prove why he’s one of DC Comics’ greatest heroes in “Batman: The Brave and the Bold – Season One, Part Two”. Batman (Diedrich Bader) is the World’s Greatest Detective, but even he could use some heroic help in his relentless pursuit of justice. In this collection of 13 episodes, Batman teams up with Adam Strange, Etrigan the Demon, Huntress, Booster Gold, Jonah Hex, Kamandi, OMAC, Doctor Fate and the Outsiders for some exciting adventures against evildoers of Earth and beyond. 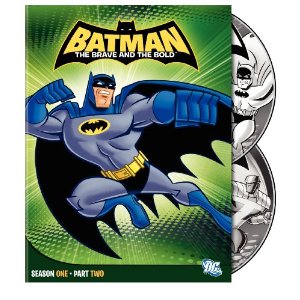 BATMAN: BRAVE AND THE BOLD takes a break from portraying the Dark Knight as a Gloomy Gus. But, no worries, those who miss the more morose version will be happy to note that this sucker’s slated for cancellation after three seasons, with a new animated – and darker – Batman series waiting in the wings to restore order. Meanwhile, why not enjoy the ride? This is a really cool show. The hook, of course, is that Batman in each episode teams up with a different superhero. Makes it kinda hard to maintain that brooding loner vigilante rep.

The tone of the stories takes a cue from the breezy jazzy score and from the look of this Batman, his design decidedly inspired from how he was drawn back in the Silver Age, an era in which Batman stories leaned towards the lighthearted. This Batman is pretty chill. He doesn’t mind engaging in banter. He even indulges in unashamed alliteration. Where else can you hear Batman throw out over-the-top lines like: “The Hammer of Justice is unisex!” or “Good work, guys. Justice wins the day, thanks to the Brave and the Bold.” The Tick should take notes.

I still got love for Kevin Conroy, but Diedrich Bader is fantastic as the voice of Batman. He’s got that good timbre. Granted, I was momentarily out of sorts because, for a while, every time Batman spoke I kept thinking of that borderline creepy (and yet hilarious) character Bader plays in OUTSOURCED.

The episodes are uniformly stand-alone, each kicking off with a teaser segment which often has nothing to do with the main storyline. Two exceptions are “The Color of Revenge!” and “Mayhem of the Music Meister!” What sets this Batman series apart from the other ones in the past is that the premise opens it up to the entire DC universe, instead of being confined only to the Batman mythos. The recent THE BATMAN, in its fifth and final season, got to play in a bigger sandbox. But BRAVE AND THE BOLD has the run of the entire friggin’ park (if you get the analogy).

Gratifyingly, this series features the lesser-known heroes, from Adam Strange to Kamandi to Jonah Hex – and never mind that Bat-Mite doesn’t think any of these cats are worthy to “buff Batman’s batarang.” Maybe my favorite team-ups showcase Booster Gold (“Menace of the Conqueror Caveman!”) and Sherlock Holmes (“Trials of the Demon!”). This last one simply begged for a series of one-upmanship, and a sequence in which Batman and Holmes are trading deductions cannot be anything but gold. But, hands down, the best episode in this collection – and, frankly, in the entire series – is the Buffyesque musical episode “Mayhem of the Music Meister!” Neil Patrick Harris guest-stars as the Music Meister and he sings up a storm. As does the voice actress – Grey Delisle – who plays Black Canary. This episode is so awesome that I have to give this collection 5 stars out of 5, instead of my original intended rating of 4 stars (because I’m still a little cheesed that they’re holding off on releasing a complete season DVD set).

By the way, I’m still lovin’ the series’ interpretation of Aquaman as this adventurer who is extroverted, devil-may-care, and prone to bombastic oratory. Again, the Tick should take notes. Jaime Reyes, one of my favorite new characters, gets a spotlight in “Night of the Huntress!” as he drools over the Huntress.

Batman the brave and the bold is an imaginative, bright, colorful, fun, and immensely enjoyable show. Even though this set is not in HD and has no special features, it is still worth it. If you are a Batman fan, of any kind, this is a must buy. If you enjoy cartoons, this is a must buy. If you are a Batman snob who refuses to recognize the character unless he is in all black and is constantly in pain, you need to get over that, and buy this anyway.
Overall Rating: 9/10