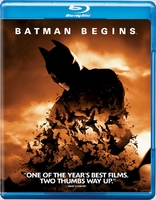 Superhero franchises need a reboot every few years in the comic book world to help bring back a unique freshness to a series. Hollywood has gone back and done the same with many of our favorite superhero franchises including ‘Superman’ and ‘Batman’. The ‘Superman’ franchise was out of the public eye for years, while the Batman franchise had turned into a kid friendly type of movie where promotion was more important than taking the franchise in the right direction. I really liked Tim Burton’s rendition of ‘Batman’ with his first two films, albeit ‘Batman Returns’ being ultra dark film. His style helped shape the first two ‘Batman’ films rather well, but enter Joel Schumacher for the next two which helped bring the franchise down more than many expected.

Enter Christopher Nolan as our director, David S. Goyer as our screenwriter, and Christian Bale as our superhero ‘Batman’ in the new retelling of ‘Batman’s’ origin on the silver screen. All 3 come together to pack a punch on the retelling of ‘Batman’ and ‘Bruce Wayne’ in ‘Batman Begins’. What even helps make this a much more fantastic film is that the supporting cast is actually really good. Without having such a good supporting cast, this film could have easily gone down a few notches. What also adds even more is the addition of our villain ‘Scarecrow’ played by Cillian Murphy. Murphy plays the role so well because of his maniacal look alone. One thing that Nolan and Goyer do so well here is that this film does not feel like a 2 combo villain affair as the last 2 ‘Batman’ feature films did. Tim Burton did a good job with making the villains in his films feel special. With Schumacher’s versions, they felt so cartooney and out of place as loners, let alone having 2 or 3 villains teaming with each other.

Liam Neeson plays an excellent character too, and for those that have not seen the film I will not spoil who Neeson is in any way. Add all these pieces together and you have an excellent retelling of ‘Batman’ on the silver screen. Gotham City looks fantastic here too; it keeps that gritty feel of a city that went down due his powerful parents being murdered. It just felt more realistic to me with Gotham City in this film the way it was represented.

Christian Bale is the best ‘Batman’ since Michael Keaton, if not the best. There, I finally was able to get that out of my system. Val Kilmer and George Clooney did nothing for me as the caped crusader, but we finally have a person that even tops the great Michael Keaton as ‘Batman’.

The HD DVD version of ‘Batman Begins’ was one of a crown jewel in my collection. The day that I decided to sell off my HD DVD collection, it was rather upsetting. I am so happy that I did for reasons to only own 2 formats instead of 3, but the wait is finally here. ‘Batman Begins’ is presented in 2.40:1 widescreen. The transfer is the same exact as the HD DVD release for those wondering. I have no issues with that at all, due to the HD DVD release being a spectacle and demo quality to begin with. The image is sharp and very detailed with Blacks taking front and center as they should be in a film like this.

Warner brings over the Dolby TrueHD 5.1 track from the HD DVD. The sound in ‘Batman Begins’ is fantastic and still holds up very well through the action sequences to the dialogue scenes. Just like the HD DVD version had my house rumbling, so did the Blu-ray version. In all my reviews, I always mention the dialogue scenes and is a test for the sound engineers due to some releases having high action sequence sound vs. low dialogue scenes. ‘Batman Begins’ stays consistent throughout the entire film with the entire sound field.

For those that don’t already own ‘Batman Begins’ in high definition, I highly recommend that you pick this title up for your collection. From the best ‘Batman’ film in the entire franchise to demo quality material, this is worth picking up when online retailers like Amazon are selling it for $17.95.