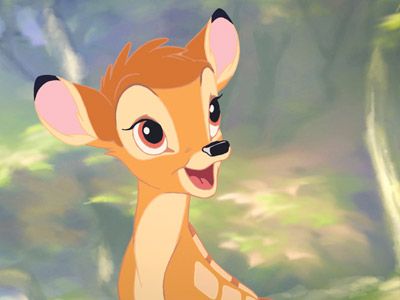 It always comes up when people are comparing their most traumatic movie experiences: “the death of Bambi’s mother,” a recollection that can bring a shudder to even the most jaded filmgoer. That primal separation (which is no less stunning for happening off-screen) is the centerpiece of Bambi, Walt Disney’s 1942 animated classic, but it is by no means the only bold stroke in the film. In its swift but somehow leisurely 69 minutes, Bambi covers a year in the life of a young deer. But in a bigger way, it measures the life cycle itself, from birth to adulthood, from childhood’s freedom to grown-up responsibility. All of this is rendered in cheeky, fleet-footed style–the movie doesn’t lecture, or make you feel you’re being fed something that’s good for you. The animation is miraculous, a lush forest in which nature is a constantly unfolding miracle (even in a spectacular fire, or those dark moments when “man was in the forest”). There are probably easier animals to draw than a young deer, and the Disney animators set themselves a challenge with Bambi’s wobbly glide across an ice-covered lake, his spindly legs akimbo; but the sequence is effortless and charming. If Bambi himself is just a bit dull–such is the fate of an Everydeer–his rabbit sidekick Thumper and a skunk named Flower more than make up for it. Many of the early Disney features have their share of lyrical moments and universal truths, but Bambi is so simple, so pure, it’s almost transparent. You might borrow a phrase from Thumper and say it’s downright twitterpated. 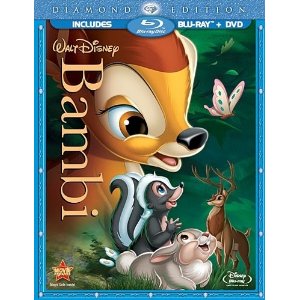 From the opening scene where the multiplane camera glides through a quiet forest until the stirring forest fire climax, a viewer has to be aware he is watching one of the all-time great films. So much of the cycle of life is covered that it’s hard to realize the film is a mere 69 minutes. In a book called ‘The Making of Bambi’, Ollie Johnston reveals that originally there was much more footage that Disney eventually trimmed, cutting out whole sequences before the film previewed. Obviously, he made a wise decision.

There is no extraneous scene here, it moves seamlessly through its cycle of life story with the charming animal creatures carrying the story to its logical conclusion. The background music complements all of the drama and comedy. The storm sequence is the most beautiful blend of music and drawings ever achieved by the Disney artists. The naturally drawn deer are the result of months of careful preparation and study, giving the entire film the feel of a nature study as well as giving the audience great entertainment.

The choral work is extremely effective, particularly on songs like ‘Love Is A Song’ (Oscar nominated), ‘I Bring You A Song’ and ‘Little April Shower’. The impressionistic forest glows with a life of its own and is the real star of the film, thanks to the influence of Japanese artist Tyrus Wong. No wonder this was Disney’s favorite film. It will stay fresh and young forever. An awesome achievement!

In conclusion, having done some choral work myself as a glee club singer, I especially appreciated the great contribution made by the mixed chorus (male/female) that does such a wonderful job on all of the choruses that blend so seamlessly with the rich background score. Truly exceptional choral vocals conducted by Charles Henderson.

The print is presented in 1080p/AVC MPEG-4 with a 1:33:1 aspect ratio. Featuring a terrific restoration, “Bambi” has never looked better on Blu-ray. Like many films of the era “Bambi” was shot on nitrate stock which disintegrates fairly rapidly over time so the miracle here is that it looks as good as it does (due to careful care) and the magic of digital technology. The images sparkle with a crystal clear image almost too perfect. The rich color, deep dark blacks and detail in the images are truly astonishing.
Print Quality: 9.5/10

The audio is presented in a DTS-HD MA lossless 7.1 mix. The remastered sound makes fairly good use of the 7.1 DTS-HD MA lossless 7.1 mix. Given that the original film’s soundtrack was mono, the surround speakers are used surprisingly well. You’ll have to reset your expectations though as this 60 year old film wasn’t designed with any of our home theater equipment in mind.
Print Quality: 9.5/10

I love the classic Disney movies. I was kind of sad when Disney put this one back in the vault. But now they are releasing it again. Now my son will be able to watch this classic along with other classics that Disney are putting out again, such as Beauty and the Beast, Cinderella, and others. I know these are nothing like todays movies which are fast paced, but I think that younger children will enjoy them. And lets face it, there is a big kid inside all of us.
Overall Rating: 9/10