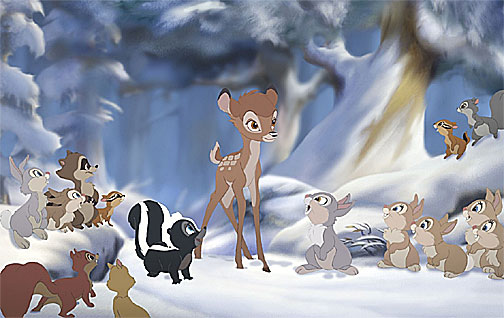 All your favorite friends are back – Bambi, Thumper, Owl, Flower and Faline in this magnificent Special Edition of Bambi II – now available for the first time in Blu-ray High Definition. Return to the forest and join Bambi as he reunites with his father, The Great Prince, who must now raise the young fawn on his own. But in the adventure of a lifetime, the proud parent discovers there is much he can learn from his spirited young son. Celebrate the unbreakable bonds of family and the power of friendship in this unforgettable coming-of-age tale your family will enjoy again and again. 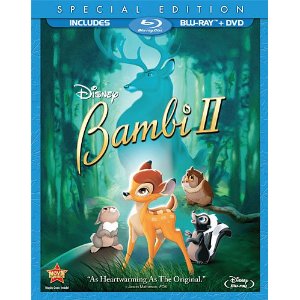 Over half a century ago, our nation fell in love with Walt Disney’s 5th animated film, Bambi. Now, a new generation is introduced 64 years later to the “midquel” of a classic that charmed thousands of viewers. Bambi II, which went directly to video in 2006, takes place in the months following the death of Bambi’s mother. This is a logical place to add on to, as the original 1942 movie made a large leap from that sad winter to a spring when Bambi had fully matured.

This story follows a recently motherless Bambi. His father, the Great Prince of the Forest, tries to locate a foster doe to raise the young fawn. As a doe could not be found until next spring, the Great Prince is faced with the challenge of raising his young son who is almost a stranger. Bambi yearns to win affection and approval from his lofty father by “listening” to the woods, leaping great distances, and generally working to please. A budding father-son relationship begins, which is eventually shaken and must be rebuilt. I commend this part of the film, thanking the folks at Disney Studios for the absence of an instant happy ending.

Although connecting with his father is the central plot of Bambi II, Bambi predictably meets and has some rather forgettable adventures with his best friends Thumper the rabbit and Flower the skunk. I was surprised at the appearance of Ronno, (who goes nameless as the rival stag in Bambi) a young buck whose antlers had already come in and serves as the movie’s main antagonist. Unfortunately, Ronno’s personality never goes beyond that of a schoolyard bully; he tries to impress Faline or taunts Bambi. However, I do appreciate the fact that the filmmakers seems to have referenced Felix Salten’s novel, Bambi, a Life in the Woods for the character of Ronno and the scene involving Man’s deer call. One could also argue Salten’s work inspired a certain scene involving grasshoppers.

If one were to stop Bambi after the death of the mother doe and begin Bambi II where it is meant to take place, the differences of the two would be alarmingly evident. There is very little dialogue in Bambi, emotion being expressed by Walt’s sunning visuals. Bambi II, on the other hand, is full of chatter, probably to help it appeal to modern young audiences. Not to say Alexander Gould does poorly as the voice of the title character. He gives Bambi nice emotion and life. Brendon Baerg’s Thumper, however, doesn’t sit well with me. The scenes involving Thumper and his sisters seem to try to be cute to the verge of them being annoying. Patrick Stewart’s performance wavers between being pompous and noble as the Great Prince, while Andrea Bowne makes a very sweet Faline. Faline no longer giggles hysterically, yet quietly makes herself heard. There are points within the film where Bambi and Faline look at each other so lovingly it just about melts your heart.
Movie Quality: 8/10

The print is presented in 1080p/AVC MPEG-4 with a 1.85:1 aspect ratio. This is the best video version to date as the Blu-ray really shows off the vibrant colors of the film. Fur strands are much more notable, with exceptional details. Blacks are inky and deep and the special effects absolutely look awesome. And while I didn’t see any compression artifacts or any major defects on the picture quality, I did notice very little banding. This film looks awesome on Blu-ray!.
Print Quality: 9.5/10

The audio is presented in a DTS-HD MA l0ssless 5.1 mix. The sound is rather impressive in ‘Bambi II’ and this I wasn’t even expecting going in. It takes advantage of the soundfield with the rears actually getting some sound effects and the soundtrack peers into the soundfield. Dialogue is well placed through the center channel with voices being so ever clear.
Print Quality: 9/10

Bambi II might not feel to some like it adds much to the original, but it is certainly more of a story than many of the other direct-to-video fare that Disney Studios steadily churns out. I suggest renting it before buying it.
Overall Rating: 7/10