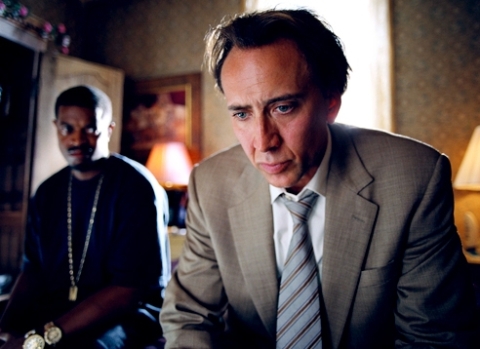 In Werner Herzog’s new film Bad Lieutenant: Port Of Call New Orleans, Nicolas Cage plays a rogue detective who is as devoted to his job as he is to scoring drugs while playing fast and loose with the law. He wields his badge as often as he wields his gun in order to get his way. In the aftermath of Hurricane Katrina, he becomes a high-functioning addict who is a deeply intuitive, fearless detective reigning over the beautiful ruins of New Orleans with authority and abandon. Complicating his tumultuous life is the prostitute he loves (played by Eva Mendes) and together they descend into their own world marked by desire, compulsion, and conscience. The result is a singular masterpiece of filmmaking: equally sad and manically humorous. 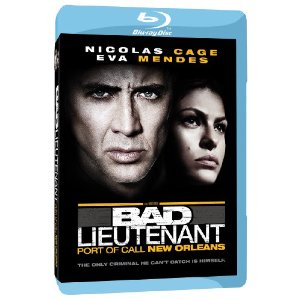 This is a remake of Abel Ferrara’s gritty, powerful drama Bad Lieutenant did not seem the most obvious film for the famed German director to make. Minutes into the film I realized I was watching something very different from Ferrara’s movie and Herzog’s insistence that this film is not a remake is more than correct. The two films are only similar in title and in the fact they have a crooked cop at the center of it all. The way the material is handled, as well as the story itself is completely different and while Bad Lieutenant: Port of Call, New Orleans will get just as much criticism as acclaim, it should not be compared directly to the original film.

The film opens in the aftermath of Hurricane Katrina. Nicolas Cage plays Terence McDonagh, who saves a drowning prisoner and winds up with severe back problems. He’s prescribed vicodin and six months later he’s been promoted to lieutenant and picked up a cocaine habit. The story involves five people being killed execution-style in a drug-related homicide and Terence investigating it while stealing drugs from the property room, misusing his power as lieutenant for sex, and all other sorts of “bad” things.

Ferrara’s Bad Lieutenant didn’t have much of a plot…The story just sort of followed the lieutenant through his downward spiral of depravity. Herzog’s follows his lieutenant through a story while illustrating his depravity; which, I’d argue, isn’t quite as depraved as the original. This film does borrow some of the elements of that previous film, but if you were to drop the title you’d realize this is a completely different film.

The film, aside from being glossier than the gritty original film, also has no problem going completely over-the-top or lurching over into something random and weird. The “iguana scene” is so ridiculously random, yet it gives this film it’s own unique stamp in a way. I haven’t seen many movies by Herzog but there are some creative touches which could have only come from his mind; the scene with the iguana and the scene with the alligator for example. Despite Herzog being a terrific, highly respected director I’m not sure he was taking his work here entirely seriously here opting for having fun rather than making a masterpiece.

The film has some good cinematography and Herzog picked some great locations to film; the film has a film-noir quality at times, but the musical score by Mark Isham didn’t fit with the overall tone at times. Bad Lieutenant: Port of Call, New Orleans works as entertainment, but it didn’t draw me in the way the first did. Ferrara’s film is a tragedy, a compelling character study and morality tale. Herzog’s film is a comedy, entertaining and unique. I’m not sure there’s a point in telling this story without the morality or redemptive aspect to it. As I said though, I will not base my enjoyment of this film off of how it compares to the other.
Movie Content: 8.5/10

The print is presented in 1080p/MPEG-4 with a 1.85:1 aspect ratio. The print looks very good throughout without any apparent issues. Colors are vibrant and carry pop which brings out the fine details. The detailed scenes stand out very well. Blacks are deep. I found the print to be crystal clear with no artifacts or print damage. The film noir look and feel of the film looks great with the appropriate lighting making this film standout as almost like a timepiece. Overall, this is a fairly impressive print.
Video Quality: 9.5/10

The audio is presented in Dolby TrueHD lossless 5.1 mix. The audio takes advantage of the soundfield with the rears getting a good amount of usage from the soundtrack and special effects. Special effects such as guns blazing sound very good. Dialogue is clean and clear through the center channel. This is a well balanced mix with no issues of having to raise or lower the volume.
Audio Quality: 9/10

This film is over-the-top, ridiculous, and unique; I found it hard not to be amused and entertained. The first film left me shaken and stunned, this film left me shaking my head at how a similar story could be handled in such a different way. The film on Blu-ray offers excellent video and audio. Fans of the original will want to check this one out.
Overall Rating: 8/10