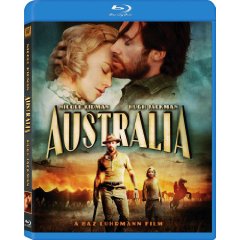 Watching the early reels of Australia, there’s certainly no doubt who’s in charge: this could only be a film by Baz Luhrmann, that wacky purveyor of all things over-the-top. In this old-fashioned, 165-minute hymn to his native continent, Luhrmann travels back to the late 1930s/early ’40s, for a scenario that would not have been out of place at MGM in that era.

‘Australia’ is a long, but great movie that has everything: adventure, comedy, action, treason, and magic in the mix. I loved the song from Wizard of Oz and how it is a theme for this movie. The film had a total worldwide gross of $203 million dollars with a budget of $78 million dollars. Domestically the film didn’t do so well and it took the box ticket sales from the international markets to meet sales numbers.

The Ashley ranch was the only cattle operation on the continent that was keeping the tyrannical King Carney (Bryan Brown) from having a complete cattle monopoly on the continent. With the death of Lord Ashley it is assumed that the Carney will now win a prize government contract and squeeze the life out of any competition left. However, Lady Ashley isn’t as frail as she seems and with the help of the nomadic Drover (Hugh Jackman) sets out to win the contract, save the ranch, and keep competition in the cattle trade alive and well on the continent down under. Of course, along the way she and Drover fall in love. And all through the journey Nullah is present as Lady Ashley becomes a mother to the orphaned boy and Drover becomes a father figure. But, that’s not all either because in the background is the threat of war as Japan’s empire grows and becomes hungry for world conquest.

‘Australia’ is a beautiful film with some of the most gorgeous and spectacular cinematography seen in a film in 2008. The film brings Australia to life and despite the hardships that living there can bring, it’s easy to see how people can fall in love with the place.
Movie Content: 4/5 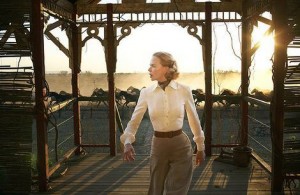 The print is presented in 1080p/AVC MPEG-4 codec with a 2.35:1 aspect ratio. This is yet another release from FOX to present a demo quality experience. Colors are vivid and provide impressive depth that pops off of the screen. The use of colors really makes this a visual experience even worth checking out if you are not interested in the film. Black levels are deep and inky. There is some subtle hints of grain throughout the presentation but never make it a hindrance. With such a wonderful presentation on Blu-ray, Australia the continent comes to life.
Print Quality: 4.5/5

The audio is presented in DTS-HD MA lossless 5.1 mix. Just like the image quality being impressive, the audio is right up there as being demo worthy. I was very impressed as to how dynamic sound effects were presented in the soundfield. There are plenty of panning effects that will catch the viewer’s attention almost immediately. While this film does have its aggressive audio for effects and soundtrack, dialogue is also excellent. Dialogue is channeled through the center with no apparent issues as the audio was clean and crisp. Then add a soundtrack with some a wonderful score and you have a runaway winner.
Audio Quality: 4.5/5 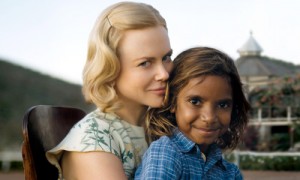 ‘Australia’ was an enjoyable film albeit being a bit on the lengthy side. The scenery is absolutely stunning and becomes even more apparent in high definition with this Blu-ray release. Both Jackman and Kidman pull out some very strong performances in this film. I highly recommend this as a rental for those curious and definitely as a purchase for fans.
Overall Rating: 4/5