Oscar winner Charlize Theron explodes into summer in Atomic Blonde, a breakneck action-thriller that follows MI6’s most lethal assassin through a ticking time bomb of a city simmering with revolution and double-crossing hives of traitors. The crown jewel of Her Majesty’s Secret Intelligence Service, Agent Lorraine Broughton (Theron) is equal parts spycraft, sensuality and savagery, willing to deploy any of her skills to stay alive on her impossible mission. Sent alone into Berlin to deliver a priceless dossier out of the destabilized city, she partners with embedded station chief David Percival (James McAvoy) to navigate her way through the deadliest game of spies. A blistering blend of sleek action, gritty sexuality and dazzling style, Atomic Blonde is directed by David Leitch (John Wick, upcoming Deadpool 2). Also starring John Goodman, Til Schweiger, Eddie Marsan, Sofia Boutella and Toby Jones, the film is based on the Oni Press graphic novel series“The Coldest City,” by Antony Johnston & illustrator Sam Hart. 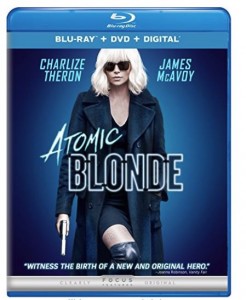 Based on the graphic novel “The Coldest City” by Antony Johnston, Atomic Blonde is a tough, bruising, causally smart, infinitely stylish thriller that often times feels like the perfect palette cleanser for an abysmally boring blockbuster season. The film may be set in winter and its hard R-rating may steal away the coveted teen crowd but believe you, me, this thing is a rollicking summer movie attraction. It’s the kind of movie attraction that takes the best aspects of glamorized espionage thrillers and adds the pulpy distinctiveness of a Walter Hill movie. And you get Charlize Theron playing a stone-cold killer too?

Man, why haven’t you bought your ticket yet? The aforementioned Theron plays Lorraine Broughton, an MI6 operative sent on a recovery mission in Berlin circa 1989. Seems a list of every double agent on both sides of the iron curtain has fallen into the hands of a low-level Stazi agent and it’s now up to Broughton to bring him to the west. Aiding/obstructing her in this mission are a nest of spies from all corners, including MI6 field head gone native David Percival (McAvoy), CIA envoy Emmett Kurzfeld (Goodman), sultry French secret agent Delphine Lasalle (Boutella) a boatload of expendable KGB operatives thrown in, because who else would be the obvious bad guys?

Director David Leitch effortlessly builds on the film’s narrative to construct strong visual kinetics and retro-cool gildings that hearkens back to a very explosive place, time and mindset. Whenever we’re given a respite from the film’s pulse-pounding action, we can drink in the psychology, the sociology and the history of a city torn apart for generations and for which the film cheekily insists is not what it’s about. Just like John Wick (2014) (which Leitch co-directed), the mis en scene is a mish-mash of tones, tunes and fashions but here the excess of cool is actually informing something.

The print is presented in 1080p with a 2.40:1 aspect ratio. ‘Atomic Blonde’ not only ups its game in terms of the visuals from the first ‘John Wick’ but the visuals are mesmerizing in Blu-ray. I don’t think the locals, including Italy have looked this good in high definition. Colors are absolutely eye popping and jump off the screen like you would not believe. Red’s, Blue’s, and Green’s dominate the color palette throughout the entire film. Details are fantastic, especially with the violence on the screen with blood splattering all over the place. The lighting is also fantastic here as you can see in the darker scenes as an example where the images doesn’t look like one dark black screen as in some films. Black levels are deep in this film and stand out very nicely with the color palette used.
Video Quality: 10/10

The audio is presented in DTS-HD MA lossless 7.1 mix. If I thought the video was impressive, the audio mix is out of this world. The audio is something that you need to experience, and I would go as far as say that this is at a 12 out of 10. The thundering bass stood out as one of the most positive aspects of the audio mix in my view. It was so perfect sounding, which I haven’t heard such great bass in a Blu-ray film. This film is so dynamic sounding, balls to the wall non-stop action which takes advantage of the soundfield. Then add the dynamic sounds coming from the rears in the soundfield. You can hear the various gun shots just whiz by from speaker to speaker, it is just amazing when you have the correct audio setup.

‘Atomic Blonde’ has a few flaws but is overall an entertaining, stylish and twisted action-thriller that will appeal to those interested in the Cold War and in movie centered around strong women. Due to its intense action sequences and very present soundtrack, the film is best enjoyed with a awesome sound system.
Overall Rating: 9/10