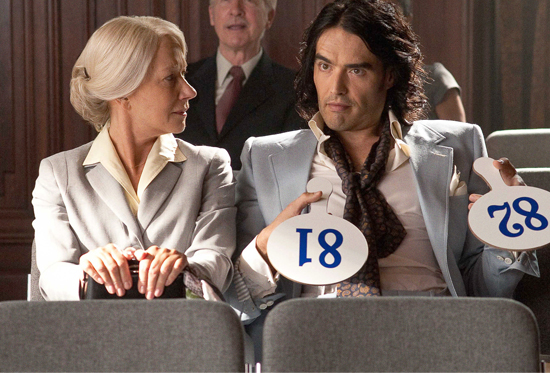 As a high-concept Hollywood pitch, remaking the charming Dudley Moore 1981 comic romp about a man-child billionaire playboy with a rather serious drinking problem and installing Russell Brand as the new lead sounded like a pretty good idea. With Brand’s reputation as a semi-reformed bad boy and actual recovering alcoholic/addict (not to mention his parlayed success from English standup fame to movies like Forgetting Sarah Marshall and Get Him to the Greek), he was a great casting choice to reprise Moore’s devilishly innocent character. In many ways Brand is among the heirs to first-wave loony British comics like Moore, Peter Sellers, and Spike Milligan, along with actors like Steve Coogan, Eddie Izzard, and Ricky Gervais. But something happened in the 30-year translation that has deflated a lot of charm from the 2011 Arthur. Brand is probably the best thing about the movie, although he’s never quite able to capture the characterization of a genuinely agreeable immature cad that Moore portrayed so adorably. This is Russell Brand playing another version of himself, which isn’t such a bad thing, just not quite adorable enough. Brand is a smart, funny, and quick-on-his-feet improviser, and lot of that comes through, but he’d probably be the first to admit that he’s no Dudley Moore. 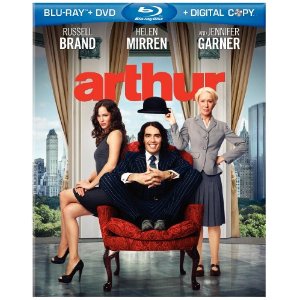 The movie tells the tale of Arthur Bach (Russell Brand), the previously mentioned drunken billionaire. His idea of a good time consists of drinking, dressing up as Batman, drinking, screwing every woman he can, drinking, spending money and drinking. He’s attended to by Hobson (Helen Mirren), who does an excellent job in her role as his long suffering nanny. Arthur’s mother, tired of his shenanigans, insists that he enter into an arranged marriage or give up his money. He’s reluctantly willing until he meets a beautiful unlicensed tour guide, and begins to learn what love is all about, etc.

As I said, I really liked this film. It’s not the best comedy ever, but I enjoyed it. Brand and Mirren worked well together and if the story was a bit predictable, that didn’t really bother me too much. Arthur does get some genuine character development in the story, even if it’s practically forced upon him, and that’s enough of a rarity in modern comedy that it’s worth comment.

It might have been wiser for the studio to do this in a way that had nothing to do with the Dudley Moore classic, but if you’re like me and haven’t seen that, or can just accept this movie on its own terms, I think you might be pleasantly surprised.
Movie Quality: 8.5/10

The print is presented in 1080p/AVC MPEG-4 with a 2:40:1 aspect ratio. “Arthur” looks decent for a high definition film but I felt underwhelmed most of the presentation. It is a shame that a newer release like “Arthur” doesn’t visually stack up with newer comedies released in 2011 in terms of video presentation. Colors are strong with this transfer but more on the softer side. This did cause some lack in details throughout the print. Inconsistencies like these should not be occurring this late in the life of Blu-ray.
Print Quality: 8/10

The audio is presented in a DTS-HD MA l0ssless 5.1 mix. This is a more dialogue driven film with excellent audio for the premise of the film. With this being a romantic comedy, there are no action sequences, so don’t come in expecting a bombastic mix. Dialogue is very clean and crisp through the center channel. We have more of a front heavy experience with the mix as dialogue also tends to pan between the front speakers. When the rears get are in use, you hear a sound effects and the soundtrack.
Print Quality: 9/10

Whenever a remake is released, comparisons to the original are inevitable. Most people tend to go for the original and remakes are rarely as well liked. The 2011 “Arthur” is a good movie though that fans of the original will be surprised.
Overall Rating: 7/10