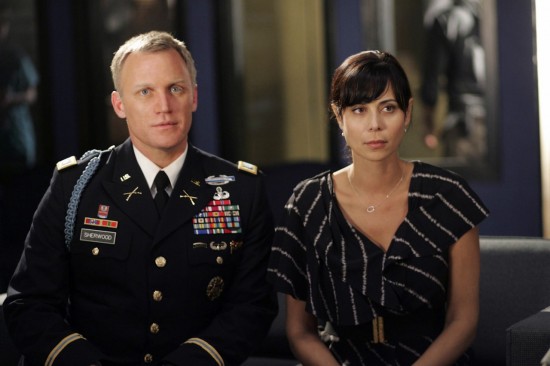 Relive the heart-warming drama of one of America’s most beloved series with Army Wives: The Complete Fourth Season. Experience the inspirational stories of four women and one man who are married to those serving in the military as they try to balance family life with the all-encompassing call of duty. Our tribe takes great pride in the Army while they experience many challenges. Friendships are tested as Denise receives unexpected news. Roxy grapples with her pregnancy and the anxiety of where Trevor’s promotion will take them. Meanwhile, Pamela’s marriage becomes more complicated, and she deals with the many changes that arise when she jumps into a whole new career. Claudia Joy pursues a new dream of her own, and Roland balances his role as a parent to Sarah Elizabeth with his demanding career and his relationship with Joan, a Lt. Colonel affected by the war.

One of my issues with the show “Army Wives” is that, as the only show on TV exploring the complexity of being married to someone in the military during war-time, it often fails to take advantage of its unique opportunity to really explore that complexity. In “Army Wives,” the lighting is often soft and golden, as are the characters. The women’s hair, even, often seems back-lit by what I can only assume is the Army Wife halo of goodness. The colors – walls, trees, Frank’s dress uniform – are saturated and rich. There is a subtle, but ever-present, reminder that this is entertainment.

Roxy and Trevor have been struggling financially ever since we’ve known them. And the issue has come into sharper focus as first Roxy’s struggled with her restaurant, and then Trevor has questioned whether he has what it takes to be a recruiter. Plus Finn being a genius and needing to go to private school. But now, the impending arrival of their first child together, and third child overall, might force Trevor to make a drastic move. I hope not, because if he left the Army they’d be off the show, but a change may very well be in order nonetheless.

Michael’s promotion to Major General has certainly solidified his position in the greater Army apparatus, but this season may find him (and Claudia Joy) fighting to keep Fort Marshall open. And I’m sure that Emmalin isn’t about to make their lives easy, so there’s always potential drama there. Plus Claudia Joy’s diabetes is likely not yet under control, meaning health problems are always going to be possible for her. Not a great time for Lenore Baker to be lurking about.

At home, Roland is meant to appear frazzled by caring for Sarah Elizabeth on his own, as well as by the disappearance of his business partner Price, currently wanted by the FBI for a 1980 protest. But his real drama is going to come with the news that Joan’s unit came under fire in Iraq, with the launching of a surface-to-surface missile at her position. Chances are she’s okay, but we’ve yet to know what physical, or psychological, damage the incident will inflict on her.
Movie Content: 8/10

And so if you have been a fan of Army Wives, you’ll pretty much season 4. It is everything we have come to expect and love from the show, and I think it sets up a few storylines that I think will be really interesting to watch.
Overall Rating: 7/10