From the mega-hitmakers who produced and directed The Rock and Pearl Harbor comes Armageddon. And now, these mind-blowing action-adventure explodes on Blu-ray for the first time ever! Bruce Willis (Surrogates, Sin City) and Academy Award winners Ben Affleck (1997, Best Original Screenplay, Good Will Hunting) and Billy Bob Thornton (1996, Best Adapted Screenplay, Sling Blade) head an all-star cast that incudes Liv Tyler (The Lord of the Rings trilogy), Steve Buscemi (Con Air) and Will Patton (Gone in 60 Seconds). When NASA’s director (Thornton) realizes the Earth has 18 days before it’s destroyed by a metor the size of Texas, he has only one option; land a ragtag team of roughneck oil drillers on the asteroid and drop a nuke into its core. With spectacular special effects, laugh out loud humor, a riveting story and a rockin’ soundtrack featuring Aerosmith and Bon Jovi, this adrenaline-pumping thrill ride now boasts the staggeringly intense picture and incomparable theater quality sound of Blu-ray high definitition. Bonus Features include: Aerosmith’s music video I Don’t Want To Miss A Thing, theatrical trailer, teaser trailer. 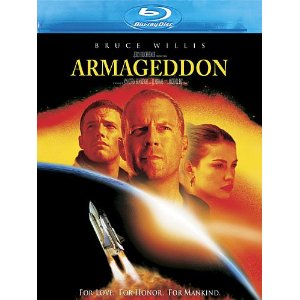 Michael Bay, whether you love him or hate, can put some crazy action scenes together. Sometimes they are really good, and sometimes they are edited just enough to where you can’t really see what’s going on. I know the man isn’t the best director in the world but I’ll go into his movies every time shutting my brain completely off and enjoy the heck out of some crazy intense action scenes.

Though you can constantly pick out the bad from a Bay movie, there is just a lot that is usually good also, but people tend to try and ignore it, or just plain out don’t care and just want to bash it anyways. Bruce Willis plays, once again, a great apple pie eating American hero. He’s just made for it. And it works 100%. From his funny lines, to his `I won’t take no for an answer’ attitude, and to his sweet and protective fatherly moments… he’s just the man. Liv Tyler is great as the `sort of angry at her father daughter, yet slightly shows it in her eyes that she loves him’ daughter. She’s great at the water works and definitely tries to pull the strings on mine when lets it go. Ben Affleck is definitely funny, but sometimes a little over the top.

Steve Buscemi is a god of course in just about everything he does and it’s the same here. I didn’t like the whole space madness thing at the end with him, but still, at least he’s funny. It’s not only the actors themselves that are funny, but the whole chemistry between them. Everyone just seemed like they were having a good time making this movie and it really shows when you see the groups of guys together doing whatever they are doing at that time.

The print is presented in 1080p/MPEG-4 with a 2.35:1 aspect ratio. ‘Armageddon’ on Blu-ray is a pleasant upgrade over the DVD and will make fans excited to upgrade their DVD’s. This is pure Michael Bay at his best with the use of strong colors throughout the entire presentation. It is one of the best parts of this film on Blu-ray, colors like oranges do stand out. Details are impressive and you get to see a lot of facial details throughout that look really good. For a 12 year old film, this looks great and the film is pre-digital age.
Video Quality: 9/10

The audio is presented in DTS-HD MA lossless 5.1 mix. This audio mix destroys the past DVD releases audio mixes by a mile and it shows. Disney really did their work here to bring certain aspects of the audio to life. There are times where this is a front heavy experience due to Bay’s decision to film the movie in this matter, it never detracts from the aurial experience. The rears receive a nice workout with debris, explosions, you name it. Dialogue is clear through the center channel.
Audio Quality: 9/10

In the end, if you like your popcorn summer action flicks where you don’t really have to think that much, then step right up and watch Armageddon. I still enjoy this movie to this day no matter how over the top and silly it can get. If you own the film on DVD, this is a definite upgrade for those looking to purchase the Blu-ray.
Overall Rating: 8/10