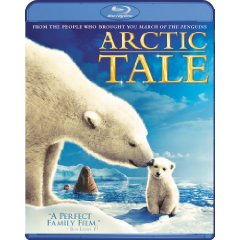 The frozen Arctic is home to polar bears and walruses, two very different types of animals whose struggle to survive against the elements is only being made more difficult by a changing climate. Directors Adam Ravetech and Sarah Robertson filmed walruses and polar bears in the Arctic for 15 years in order to create this amazing story about the lives of Nanu the baby polar bear and a newborn walrus dubbed Seelah. Striking footage from land and sea is combined with effective narration by Queen Latifa and pop music by Joby Talbot to chronicle these creatures’ lives from the babies’ first days of existence, through two years of training in hunting and fighting by their respective mothers and the changes in the icy world that are necessitating new adaptations by these animals, and a contemplation of the chances of both species’ continued survival. Like March of the Penguins, the footage of the animals of the Arctic and the formation and breaking up of the ice is exquisite, but perhaps even more striking is the clear evidence of climate change in the delayed formation of the ice in the autumn and its progressively earlier thawing and breaking up each spring. The polar bears’ and walruses’ resilience and instinctual ability to adapt and change in the face of the negative effects of global warming in order to survive is stressed, and viewers are left pondering why man cannot similarly adapt and change his ways in order to positively affect the world. Bonus features include an interesting “making of” featurette with Adam Ravetech and Sarah Robertson that describes their travels, trials, and enormous gratitude for the assistance of the Intuit people and a fun Are We There Yet? World Adventure: Polar Bear Spotting mini-adventure for kids in which Molly and Sam go looking for polar bears in a tundra buggy.

Unlike March of the Penguins, this movie is about two species: a walrus and a polar bear. The movie picks and chooses what they want to show from a couple of years instead of giving a lot of details about a specific short time period, as with the March of the Penguins. It gives general information with the typical video that you can easily find on television animal programs (nothing exciting or amazing).

The movie continually brings up global warming throughout (even though people consider me an environmentalist, even though I don’t preach it at others, as often happens from radical alarmist environmentalists). They show how the ice is melting and blame it on global warming without ever mentioning it’s during the summer when the ice normally melts and shifts (the March of the Penguins never blamed global warming for the water being so close to the breeding ground at one point of the cycle). They show how one baby bear dies from starvation and implies it’s from a lack of food due to global warming without mentioning over half of the baby polar bears (mother polar bears usually give birth to two bears at a time) have typically been dying from starvation as far back as when humans began studying them before global warming became an issue (nor that there are more polar bears in existence now).
Movie Content: 6/10

The audio is presented in DTS-HD MA lossless 5.1 mix. This is not an audio mix that you will go in expecting huge things from the soundfield as it is a documentary primarily dialogue driven. Queen Latifah provides the narration. The dialogue is clean and clear through the center channel with no apparent issues. The surrounds come into play with the sounds by the animals,but not overdone.
Audio Quality: 8/10

I felt like this film was to cash in on the success of the March of the Penguins instead of giving us a smarter documentary. This was a decent documentary, but not one of the better ones that I have seen.
Overall Rating: 7/10