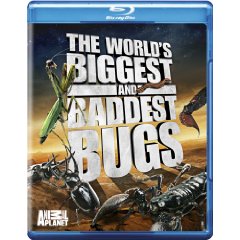 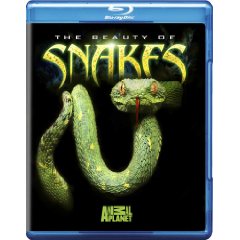 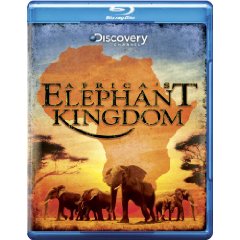 The Beauty of Snakes Synopsis
Celebrate some of the world’s most spectacular snakes from the majestic king cobra to the tiny thread snake, the desert horned viper to the banded sea krait. Despite their fearsome reputation, snakes are some of the most fascinating of all creatures.

It is fair to say that the special interest category of nature films and documentaries have been more successful early on with the Blu-ray format than one might have first thought, so many companies are putting out product to take advantage of demand.  Genius Entertainment and Animal Planet have issued three basic editions of three specials they believe consumers will want to buy.  ‘Africa’s Elephant Kingdom’, ‘The Beauty Of Snakes’ and ‘The World’s Biggest & Baddest Bugs’ are being issued as part of the Animal Planet product line.

‘Africa’s Elephant Kingdom’ is the oldest of the shows, filmed in 70mm IMAX, it is a solid 40-minutes-long journey into these powerful, underrated, underestimated animals and the world they live in.  It is also one of the better programs in general on the subject of elephants.  ‘The Beauty Of Snakes’ was shot in HD and gets many great shots (dangerously obtained in more than a few cases) of snakes, their diversity, talents, skills and unique abilities.  Always intriguing, it is a good show at 43 minutes.  ‘The World’s Biggest & Baddest Bugs’ is a crash course on insects, particularly unique ones, big ones and ones that show the diversity of the species.  It runs 87 minutes, but might be too long for the squeamish.
Movie Content: 7/10

‘The Beauty of Snakes’ and ‘The World’s Biggest & Baddest Bugs’ are presented in 1080p/AVC MPEG-4 with a 1.78:1 aspect ratio. ‘Africa’s Elephant Kingdom’ is presented in 1.33:1 IMAX aspect ratio. The image of all three films provides some vivid colors bringing out the finer details of the print. Black levels offer some excellent depth. There was many times where I felt like some of the animals were right in my living room. The audio is presented in Dobly Digital 5.1 mix. The problem I had with the audio is that this was more of a front and center presentation. I was a little disappointed that there wasn’t much ambience in the soundfield from the rears.
Print/Audio Quality: 8/10

I enjoyed all three films from the Animal Planet product line with ‘The Beauty of Snakes’ being my favorite film out of the three. On Blu-ray all three films provide a nice image, but lacking in the sound department.
Overall Rating: 7/10