And Soon The Darkness Blu-ray Review 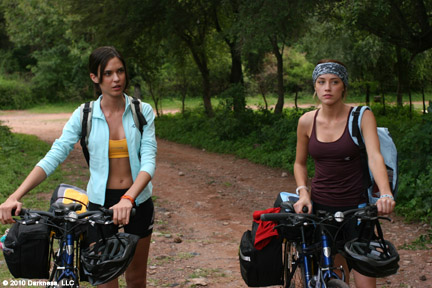 Stephanie (Amber Heard) and Ellie’s (Odette Yustman) vacation to an exotic village in Argentina is a perfect ‘girl’s getaway’ to bask in the sun, shop and flirt with the handsome locals. After a long night of bar-hopping, the girls get into an argument, and Stephanie heads out alone in the morning to cool off. But when she returns, Ellie has disappeared. Finding signs of a struggle, Stephanie fears the worst, and turns to the police for help. But the local authorities have their hands full already – with a string of unsolved kidnappings targeting young female tourists. Skeptical of the sheriff’s competency, she enlists help from Michael (Karl Urban), an American ex-pat staying at their hotel. Together they go on a frantic search for Ellie, but Stephanie soon realizes that trusting his seemingly good intentions may drag her farther from the truth. With danger mounting, and time running out, Stephanie must find her friend before darkness falls. 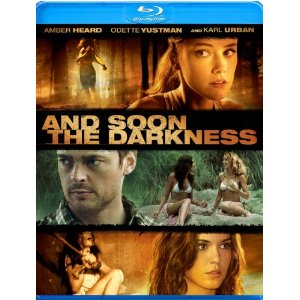 Two girls are on a biking excursion in Argentina. A minor argument ensues one day and the two take a few hours off from each others’ company. Problem is that one of them disappears and may be another victim in a spate of local kidnappings. The other hooks up with an American who happens to be staying at the same hotel and the two set to see what they can see.

From what I understand of the original, which was set in the French countryside, it’s power derived from it’s ability to take a serene countryside setting, in broad daylight, and infuse it with a sense of menace. In this version, most of the shots of the countryside look really beautiful and actually provide a respite from the uneasiness caused by the fact that you have two young girls, traveling alone in, what we consider, a third world country, working under a language barrier.

This movie is so-so. For my dollar it took way too long to get to the heart of the matter. My guess is it’s a good 45 minutes before the actual kidnapping occurs. And when it finally does occur the attempts at finding our victim are rather tepid. As a matter of fact, the break comes due to happenstance and not to any clever detective work. Another problem is that some of the promo copy intones that Karl Urban’s character might not be the good guy he appears to be. If this is so, it is also handled poorly. Whatever questions the viewer might have about his motives are swept away rather quickly.

Then there are the two female leads. The performances are not too bad. And seeing Amber Heard’s Stephanie get the jump on her friend’s two captors did little to convince me she could or would do it. I simply didn’t believe it and that is a problem at the script level.
Movie Content: 8/10

The print is presented in 1080p/MPEG-4 with a 2.39:1 aspect ratio. “And Soon the Darkness” has a dark and gritty look throughout the film. The grit is not as heavy as when the film begins which lightens up once the film gets going. The film does hold a very natural look throughout. Colors are strong at times and intentionally look a little muted to give the film that 70’s style horror look which is well done. Blacks are deep and very inky. To keep the theme of  a grittier film, there is grain throughout the film which gets a bit heavier at times but never intrusive. Flesh tones were also natural helping show off some excellent details. I found the print to be pretty good for the type of genre film.
Video Quality: 9/10

The audio mix is presented in DTS HD 5.1 Master Audio lossless track. This is a dialogue-driven film with many tense moments throughout that helps bring the viewer in the mood of the film. There really wasn’t anything special here, but there is enough in the audio keeping you engaged. Dialogue on the lossless soundtrack is crystal clear. I detected no hiss or any audio problems while watching the film. The overall audio didn’t sound as loud as I would have expected which is a bit of a disappointment.
Audio Quality: 8/10

“And Soon The Darkness” is a pretty decent thriller/suspense/horror film which is a remake of a 70’s British film. Some aspects of the film work well and then there are some that had me scratching my head. This is worth a rental on a rainy night if you do not have much to do. The video is true to the source material and the audio could have been better with more pop.
Overall Rating: 7/10