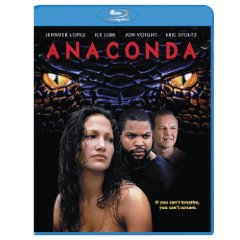 This giant-man-eating-snake-in-the-jungle thriller definitely scores points as a guilty pleasure, especially with Jon Voight hamming it up as the monster-poacher. He makes life miserable for a team of documentary filmmakers on the Amazon river. Anaconda is one of those movies that exists for no other reason than to give computer animators a chance to strut their stuff with a new digital beastie, and they don’t disappoint. It’s a lot of fun to watch the mega-snake scarf down its victims and–in the case of Voight–regurgitate ’em right back up again, all covered in gooey digestive juices. You might wonder why Eric Stoltz, who plays Dr. Steven Cale, showed up for a role that requires him to be off-screen for most of the movie, but hey–when it comes to big snake movies, you might as well put your brain on hold and sit back for the slimy ride.

A group of filmmakers looking for a lost native tribe instead finds a man-eating monster in this thriller. Terri Flores (Jennifer Lopez) is a documentary filmmaker on assignment to make a film about the Shirishama Indians of the Amazon, a mysterious tribe known as “The People of the Mists.” As Terri and her crew – cameraman Danny Rich (Ice Cube), sound engineer Gary Dixon (Owen Wilson), anthropologist Steve Cale (Eric Stoltz), production manager Denise Kahlberg (Kari Wuhrer), and host Warren Westridge (Jonathan Hyde) – head down the river, they discover a man whose boat has sunk and desperately needs rescue. Paul Sarone (Jon Voight), the mysterious stranger that they save from the waters, claims to know something of the Shirishama and says he will take the crew to them. Instead, he guides the group to the hiding place of the fearsome Anaconda, a gigantic snake that swallows a man whole, vomits him up, and eats him again. The snake is worth a fortune if captured, but its not going to go without a fight.

The anaconda itself is a supernaturally gifted critter with the ability to swallow a man whole, yet still maintains the fitness to move at the speed of lightning. Stalking its prey, the snake switches back and forth between a CG Loch Ness Monster to what seems to be a length of over-sized garden hose. Then there’s Voight as a Great White Hunter with a marble-mouthed accent.
Movie Content: 8/10

The print is presented in 1080p/AVC MPEG-4 with a 2.40:1 aspect ratio. Having owned the DVD now since its initial release on the format, this Blu-ray release is a nice upgrade. Colors look great throughout the print with the foilage, trees, and water looking vivid.The image is clean and pristine from any artifacts or print damage. This is the cleanest the print has looked for home video. Aside from some of these good points, there are a few issues such as the dreaded Edge Enhancement. It is not apparent in all scenes, but when you do see EE, it is apparent. In some scenes flesh tones look good, while in others you get waxy looking faces. This is not a perfect transfer, but it gets the job done.
Print Quality: 8/10

The audio is presented in Dolby TrueHD 5.1 mix. I was surprised by the audio mix as how dynamic the sound effects and the score were across all surrounds. From gun shots, shattering glass, and the slithering anacondas you will feel like the action is taking place right in your living room. The dynamic sound effects from speaker to speaker are really well done in this mix as you hear numerous effects whiz by in the background. The rears encompassed a decent amount of ambient sounds. Bass management is lacking a bit in this film and sounded on the softer side. Dialogue is clean and distinct through the center channel.
Audio Quality: 8.5/10

If there are any disappointments with this disc, there are no special features which is a shame.

‘Anaconda’ is a decent action/horror film that is not going to win any awards, but will keep you entertained from start to finish. While the print may not be perfect, both the video and audio are a considerable upgrade over the DVD making this a worthy purchase for owners of the DVD.
Overall Rating: 8.5/10